Family Yet to Hear News on Kidnapped FOX Reporter Centanni

FOX News sent Jennifer Griffin and another reporter into Gaza to help with the release of the kidnapped journalists,
VIDEO HERE 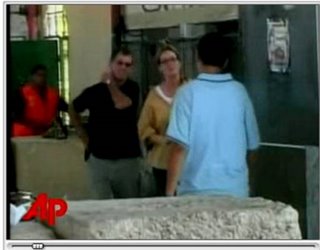 Jennifer Griffin gives possibly the best news reports out of Israel and Gaza. How capable she is at negotiating is still in question.

Update on the kidnapping of Fox News reporter, Steve Centanni, and his New Zealand cameraman:

She said that the network doesn’t know who abducted the men, but added that “negotiations were under way to secure their release”.

He added that the men seized the journalists and sped away.

** In contrast to the above report, Gaza officials and family members say that they have not heard from the kidnappers.

The family is concerned that no one has heard from the kidnappers yet:

Family members of a Bay Area native kidnapped in Gaza say his abductors haven’t attempted to start talks about his release.

Steve Centanni, 60, was kidnapped at gunpoint in Gaza on Monday as he and his cameraman, Olaf Wiig, drove through the Palestinian territory. Both work for Fox News.

Centanni grew up in Los Altos and worked for local radio stations and KRON TV before joining Fox, according to his brother Ken Centanni, who lives in San Jose.

Fox News representatives called Ken Centanni and another brother, Nicholas Centanni, of Los Gatos, early Monday to tell them of their brother’s kidnapping.

Lorie Byrd has more and notes that there is still a media blackout at FOX News.

AllahPundit things that this may be a bit different than the usual Gaza kidnapping.