** This has got to be the best kept media secret in the country!

Despite the current oil crisis and the fact that China with its abysmal environmental record is drilling within 70 miles off US shores, Democrats continue to vote against oil drilling and exploration. 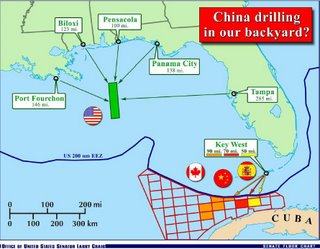 Despite democrat resistance the vote passed in the Senate on Tuesday.

The Senate on Tuesday, despite democrat resistance, approved drilling in protected US coastal areas in the Gulf of Mexico. Democrats voted down the measure.

The Washington Post throws out this VERY misleading, if not downright deceitful, statement:

The bill passed 71 to 25 with the help of Gulf Coast senators whose states would receive a big share of the federal royalties on new production, and with the support of Minority Leader Harry M. Reid (Nev.) and other Democrats who are seeking to do something in response to high energy prices.

When 23 of 25 no votes are democrats, it doesn’t appear that democrats are too concerned about high energy prices, especially when they can blame Republicans!

Those 25 no votes consisted of 23 democrats, the 1 liberal independent, and 1 Republican.

** On January 30, 2005, as reported at Granma and Caribbean Net News – Cuba signed a shared production contract with the Chinese company SINOPEC to develop potential oil fields off the island’s coast. The agreement was signed during a ceremony attended by Cuba’s Basic Industry Minister Yadira García and the Chinese ambassador to Cuba, Li Lianfu.

Here is more news on China and India drilling within 90 miles from our Florida coast.

Previously:
Thanks to Democratic “No Zones”, the US Is in Grave Danger
It’s Official, Cuba Hires China to Drill Oil Off Florida Coast
Despite Oil Crisis, Democrats AGAIN Block US Firms from Drilling!
Democrats Crack Gas Jokes Then Vote Against US Oil Development
Union Protesters Get Lost, End Up at White House