The captured Hezbollah terrorist, Hussein Ali Suleiman, confessed that he traveled through Syria to Iran for training on anti-tank weapons. 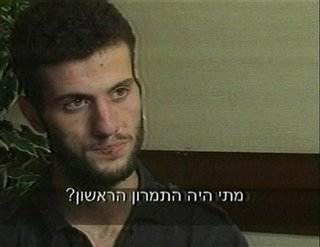 This image made from a video released by the Israeli Defense Forces, Monday Aug. 7, 2006, shows a man identified by the IDF as alleged Hezbollah militant Hussein Ali Suleiman during an interrogation at an unidentified date and location. In the video, Suleiman acknowledges his part in the raid on an Israeli army patrol July 12, the spark that ignited the current conflict with Lebanon. The text in the image is a Hebrew translation of part of an interrogator’s question, posed in Arabic, which roughly translates as ‘…when was the first training excercise?’ (AP Photo/Israeli Defense Forces)

The Hezbollah prisoner, Mahmoud Ali Suleiman, told Israeli authorities of his trip to Syria and training in Iran:

“We trained in Iran,” the man, who gave his name as Mahmoud Ali Suleiman, told the interrogator. “We went from Beirut in civilian cars… to the airport in Damascus.”

Suleiman, who gave his age as 22, said between 40 and 50 people went with him for the training, which involved instruction in the use of anti-tank weapons. He didn’t say when the training took place or how long it lasted.

The man, speaking in Arabic, said he joined Hizbollah in 2000 and had carried out two operations with the Lebanese guerrilla group, the first in December 2005 when they had tried to take on an Israeli tank entering southern Lebanon. 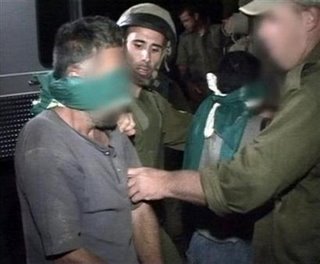 The Israeli Defence Force (IDF) released August 6, 2006 an undated video which they say shows suspected Hizbollah captives being led blindfolded in an undisclosed location. (The faces shown were pixellated at source.) (IDF/Reuters)

Israel captured one of the Hezbollah members who took part in the cross border attack and kidnapping of Israeli soldiers three weeks ago:

Israeli soldiers in Lebanon have arrested a Hezbollah guerrilla involved in the July 12 raid that captured two Israeli soldiers and sparked the devastating round of fighting between Israel and the militant group, the army said Sunday.

The guerrilla was captured in Lebanon, and under interrogation it became apparent that he was involved in that cross border raid more than three weeks ago, the army said. It did not say when the arrest was made.

Sweetness and Light has more on this not so shocking confession.
Pajamas Media again has an excellent roundup of today’s Mideast news.