Those ladies of Code Pink sure can shriek at Cheney, or Karl, or Condi, but they don’t like it too much when they are the ones getting interrupted! 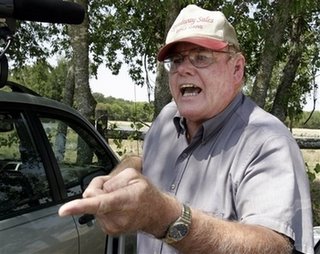 The lone counter protester was too much for the less than 50 national anti-war protesters at Camp Casey. They could not stand his loud and obnoxious criticism any longer and had to banish him yesterday from their new campgrounds:

As Sheehan spoke, saying “our hearts are connected,” regardless of people’s races, countries or religions, a man disrupted the service with loud questions and shouts of, “This is unpatriotic!” before the protesters asked him to leave.

William McGlothlin of Marked Tree, Ark., said he was visiting his son in College Station and decided to try to see Bush’s ranch, then stopped by the protesters’ site because he had heard about them and was angry.

“I believe Bush is doing what he should be doing,” McGlothlin said. “Freedom of speech is good until it gets out of whack.”

Several Bush supporters also set up a tent Sunday in downtown Crawford, which they have done every time Sheehan has returned.

Meanwhile, less than 50 members of the national peace movement joined Cindy Sheehan for a march to the president’s ranch where Mama Moonbat announced…
“My name is Cindy and Bush killed my son.” 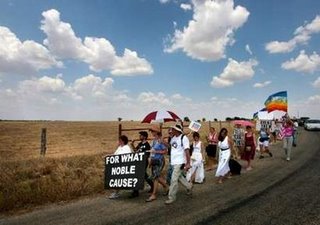 White House spokesman, Tony Snow, commented, “I would advise her to bring water, Gatorade or both.”

Wizbang has more on Camp Casey IV, or V, or whatever it is.