Even his stand-in at the American Legion Convention got booed! 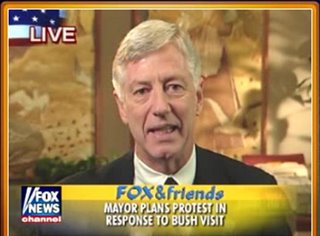 “You folks are helping to mislead the people.”
Rocky Anderson to FOX News

E. D. Hill took him to the woodshed.

The city had to hire three temporary employees to answer phone calls of outraged citizens against the anti-war liberal mayor of Salt Lake City!

The Ultra-liberal mayor of Salt Lake City was so disliked by veterans that even his stand in got booed at a welcoming speech:

Mayor Rocky Anderson, a Democrat in a city that is considered liberal by heavily Republican Utah’s standards, has accused the Bush administration of lying about the rationale for war. He has called President Bush a “complete disaster.”

And he organized a protest rally Wednesday a few blocks from the Salt Palace Convention Center, just hours before Bush’s arrival here for an address to the American Legion.

The American Legion was so offended by Anderson that it refused to extend the customary invitation to the host city’s mayor to deliver the welcoming address.

“Rocky ought to sit behind his desk and leave the rest of the world alone. I wouldn’t dream of doing things like this,” said Legionnaire Lynn Beckstead, 71, of West Valley City. “If you don’t like Bush, fine, but respect the office. This is a very conservative state, sweet and friendly. That’s not sweet.”

Salt Lake County Mayor Peter Corroon, who is also a Democrat but has said little about the war, was mildly booed Tuesday when he gave the welcoming speech, apparently because some Legionnaires thought he was Anderson.

Utah Republican Party members are asking people to call the mayor’s office and object to his shameless and disrespctful behavior. 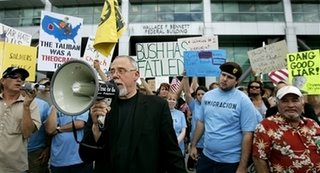 “The Taliban was a Theocracy, too!” (AP)