At least 2 are dead as 22 bombs exploded simultaneously across the south of Thailand today. 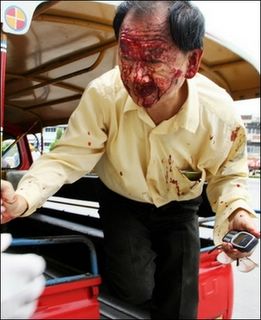 An injured man arrives at hospital following a bomb blast in Thailand’s restive southern Yala province. A wave of small bombs have exploded almost simultaneously at 22 banks in the Muslim-majority south. (AFP)

Thai officials were tipped about an attack but were still shocked that Muslim separatists targeted banks on the very busy last day of the month:

Thai police said that eight of the bombs went off in the capital of Yala province while seven exploded in the province’s outlying districts on Thursday morning.

The army said that Muslim separatists had placed most bombs in or near banks to cause maximum civilian casualties as people collected their wages at the end of the month.

General Ongkorn Thongprasom, the senior army officer in the region, said: “We received some intelligence reports, but we did not anticipate it would happen inside banks, especially on the last day of the month. We don’t believe they are that cruel.” 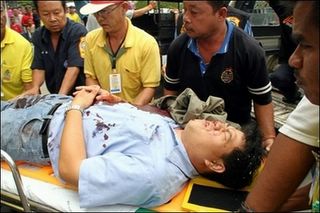 Thai volunteers carry away an injured to hospital following a bomb blast in the restive southern Yala province. A wave of small bombs have exploded almost simultaneously at 22 banks in Thailand’s Muslim-majority south. (AFP)

Government troops have difficulty fighting the Islamic Groups in the country who deploy guerrilla-style tactics:

The attacks were carried out today to mark the unofficial formation of “Bersatu” on Aug 31 1980.

It is the umbrella body for several anti-government groups like Mujahideen Islam Pattani and Pattani United Liberation Organisation (PULO) which are fighting for independence for the Muslim majority provinces.

More than 1,300 people have died since the insurgency erupted in January 2004, after decades-long silence from militants fighting for independence from the central government.

Bangkok has despatched more than 20,000 troops to the restive region but is facing difficulties in tracing down the insurgents who deploy guerrilla-style tactics.

Last month, insurgents launched more than 100 coordinated attacks in a single day to mark the day they declared independence for the provinces. 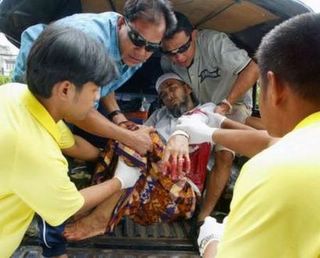 Thai officials evacuate an injured man from the scene of a bomb blast to a hospital in Yala province, about 1084 km (673 miles) south of Bangkok, August 31, 2006. Suspected militants set off small bombs inside and outside at least 21 banks in predominantly Muslim southern Thailand on Thursday. (Reuters)