Today Gen. George Casey, the top general in Iraq, said that Iraqis will be able to take over security operations in one year to 18 months.

And… Despite the 73 deaths (50 of those were insurgents you find later in the AP article) from fighting on Monday, major progress was reported in Iraq in August. 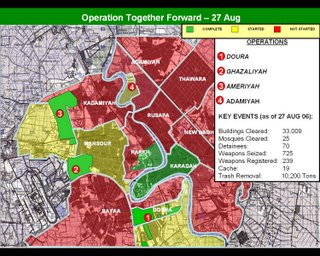 The Multi National Forces webiste reports on that 33,000 buildings were searched and secured in Baghdad last month.

Tremendous progress was made in Baghdad in August:

An employee of the main Baghdad city morgue, Muyaid Matrood, said that as of Monday, his office had received 337 bodies of people who had died violently this month, excluding bombing victims.

Health Ministry officials said about 1,500 violent deaths were reported in June as well as in July. Those figures included bombing victims. Even so, Deputy Health Minister Dr. Sabah al-Husseini said the previous surge in deaths had “obviously” diminished.

Iraqi-American Haider Ajina comments on the progress in Southern Iraq, an area that he is intimately familiar with in response to an article Iraqi news agency dated August 28t, 2006:

“Iraq and Britain in talks about Iraq taking over southern provinces”

The progress in southern Iraqi provincial forces and provincial governors taking over responsibility for their provinces is progressing. The green provinces as they are known, southern peaceful provinces, have been preparing for this. The British and the U.S. are training Iraqis to take over and rely on us for support if needed.

The big issue now is Iran’s negative influence on Iraqi democracy and provincial power. Iraqi Shiite parties supported by Iran are not in line with general Iraqi Shiite sentiment. The fundamental difference is this. Traditional Iraqi Shiite References (religious leaders) subscribe to the school of thought that governing the country is best left to politicians (Grand Ayatollah Sayyid Ali Husaini Sistani) and that politics defiles religion and thus they should only provide a role of Reference or Consultant to the politicians.

The Iranian Shiite School is exactly the flip side of this. They believe that religion should dictate politics and govern it. Further, some Iranian Shiites believe in some fantastical super human feats of Imam Ali (son in law of the profit Mohamed), to which many Iraqi Shiites do not subscribe. Imam Ali fathered the Shiite movement and opened up the mystical side of Islam. Many consider him the originator of the Sufi Muslim school of thought etc….. While all Shiites agree that Ali was a person of special understanding of Islam and its role, the split happens when some Shiite (mostly in Iran) start attributing super human activity to him (and the profit Mohamed and some of the twelve Imams to follow Ali).

This is strongly rejected by the traditionalist Iraqi Shiites. Islam is a logical religion with no super human attribute to the profit or any of his followers. Stories about the profit Mohamed ascending or riding a flying horse etc. are not substantiated in the Koran. The Koran is the only miracle of Islam. This is of course in sharp contrast to Jesus and Moses. Islam acknowledges and believes in their miracles but attributes no such miracles to the profit Mohamed.