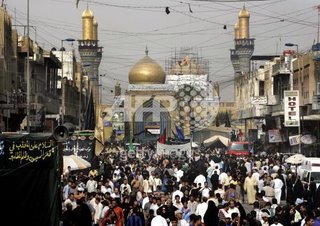 Iraqi police and security watched over a million Shiite pilgrims gathered in peace over the weekend in Baghdad’s Kadhimiyah neighborhood to commemorate the death of the 7th Imam. (Getty)

The following is a Haider Ajina translation of a headline and article from the August 22, 2006, Iraqi newspaper Almowaten

Iraqi Member of Parliament Abdul Aziz Alanzi, member of the national reconciliation committee, said; ‘the committees responsible for the preparation of the national reconciliation meetings are finalizing the preparations. The committees members are in constant contact with political, religious and tribal leaders in and outside Iraq’. He added, ‘these reconciliation meeting will happen soon. The final changes and adjustments requested by groups refusing to enter the political program are opinions, which can be added. There is no final decision which cannot be changed’. He then said, ‘The main difficulty remaining is that of those who have Iraqi blood on their hands’. Alanzi then clarified; ‘to compromise with these groups on a national level, if it brings stability, is something we can discuss. However, the rights of the families of the victims is left up to them, either to forgive or request prosecution, through the legal system or tribal law.

Alanzi then added that the Iraqi Prime Minister Almaliki has insisted these armed groups stop attacking civilians and public infrastructure before negotiations begin. The national dialogue and reconciliation committee will hold a tribal conference, in Baghdad (the first of the reconciliation conferences) over the next few days. Over 400 tribal leaders and over 100 political, governmental and religious leaders are expected to attend. Member of Parliament Sami Azar Maajoon, who is appointed to prepare this conference, said, ‘The reconciliation committee decided to hold the first of the reconciliation conference in the next few days’. He added, ‘over 400 Iraqi tribal leaders living in and outside of Iraq are attending the conference. I have personally met, during my trips to Amman, Damascus and Kuwait over the last week, over 35 tribal leaders that live in these cities. They represent tribes in western Iraq (Sunni areas), Salahudien and Musul provinces. They agreed to attend this conference in Baghdad. My trip was successful because these tribal leaders promised to attend and fight sectarianism. The tribal influence of the tribes of these leaders whom I met is significant. They will have an effect on the security and calm of the areas they come from’.

Mr. Muhamed Alaskari, official spokesman for the Iraqi department of defense, said, “Armed attacks have substantial decline, about a 70% decline compared to the last few weeks”. He added, in this defense department weekly press conference today, “Security operations from August 14 to the 21 have resulted in the arrest of 14 armed individuals and 439 suspects, the defusing of one car loaded with four barrels filled with TNT, the launch of 1679 patrols, the defusing of 21 bombs, the set up of 679 control points, and the set up of 257 traps”. Alaskari then added, “the security operation to protect the pilgrims to Al-Kadhemiah was successful. Iraqi forces have tightened the noose around the armed groups, and have substantially controlled explosive belt attacks. The armed groups were forced to use sniper attacks from some homes and lob grenades on innocent pilgrims”.

This Iraqi independent newspaper (and others) is reporting that armed attacks in Baghdad and the surrounding area are being reduced and combated. We have not heard any of this from our main news media.

The mainstream media is quick to report the increases in violence but are very slow in reporting what we, and the Iraqis, are doing to combat the violence.

Our troops have started to patrol Baghdad and the surrounding areas, and are offering Iraqi security support and back up. The terrorists were not able to blow up vehicles, or infiltrate, with homicide bombers, the massive pilgrimage to Alkademiah, near Baghdad. Over one million pilgrims came to the Shrine of the Shiite 7th Imam (or saint) Musa Alkhadum. 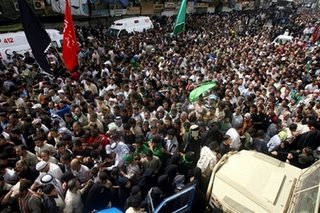 Last year, during this pilgrimage, there was a tremendous stampede after rumors or shouts of a homicide bomber. This year, apart from the sniper attack and unsuccessful grenade throws, it appears no one was killed by terrorist attacks. The Government has killed one terrorist and arrested three suspects for the sniper attacks. This is a vast improvement over what happened last year.

Monday was especially calm as most Irqis tuned into see Saddam Hussein’s trial for genocide.

Update: Michael Inhofe has it right despite those who openly campaign for a loss in Iraq.