This was sent from Lawk Salih in Iraqi Kurdistan.

Anfal trial to heal some old wounds of its survivors…

Sulaimaniya , Kurdistan (The Globe)
By Mohammed A. Salih 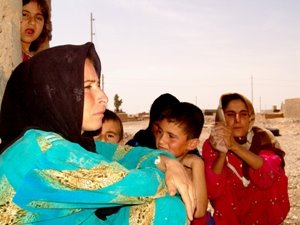 They were forcefully resettled in a camp outside the township of Kalar, 170 km South of Sulaimaniya following the Anfal Campaigns in the spring of 1988. Most of the survivors still live in miserable conditions in the camp, writes Globe correspondent Mohammed A. Salih.

Wiping the tears running on her cheeks, she sadly recalled the day when all the members of her family were arrested eighteen years ago by Saddam Hussein’s forces. Her family used to live in Piramone village, near Qadir Karam southeast of Kirkuk in peace for many years. It is for eighteen years, she said, she hasn’t heard the sound of singing birds in bushes and on trees.

The nightmare for Piramone villagers came up after Iraqi air fighter started hovering above their village for several days, ultimately frightening them to leave.

On their way to Kalar, a town 170 km south of Suleimaniya, all the villagers were rounded up in a checkpoint and then forced into military lorries already waiting for them in the place.

Hamdiya and seven other members of her family were later separated from each others. Some of them were moved to Topzawa prison in Kirkuk and others to the notorious Nugra Salman Prison, in the heart of Iraq’s southern deserts near Saudi Arabia’s borders.

“In Nugra Salman we were treated worse than animals,” Hamdiya said who now lives in Rizgari district seven km west of Kalar. “We were only given a small piece of bread and a bottle of water for an entire day.” She recalled how children, women and men were starved and then thrown out of the prison to the mercy of hungry dogs.

Many did not survive “Nugra Salman’s hell”, and those like Hamdiya who did, were doomed to an eternal life in misery and depression. All the seven members of her family disappeared in what later came to be known as Anfal Operations.
“I wish I had been killed or starved at that time as well,” said Hamdiya as she chokes on tears.

“This is no life for me. I am dying everyday.”
Anfal is a Kuranic term literally meaning the “spoils of war” and refers to a serious of notorious operations in 1982 and 1988, leading to the disappearance and death of tens of thousands of Kurds and the razing of thousands of villages in Iraqi Kurdistan.

However, Anfal started long before in late 1970s with the massacre of thousands of Faili Kurds in Baghdad and its surrounding areas at the hand of the former Baath regime. Those Faili Kurds were all tortured to death or buried in mass graves under the pretext that they were Iranians and “traitors.”

Yesterday was a rather relieving day for many Anfal survivors who saw Saddam in the defendants dock.

During the first hearing of the Anfal trial, Saddam Hussein appeared in a defiant mood along with six other co-defendants. He gestured as the president of Iraq and the commander-in-chief of armed forces and refused to plea guilty. Ali Hassan al-Majid, known as chemical Ali, a main defendant of Anfal case, chose to be silent when asked if he was guilty or innocent in Anfal case.
Kurdish politicians hope that the final verdict of the trial would recognize the genocidal nature of Anfal campaign.

Mohammed Ihsan, former Human Rights Minister in the Kurdistan Regional Government (KRG) compares Anfal with the genocide of Armans, in early twentieth century by Ottoman Empire, and Holocaust of Jews, during WWII on the hand of Nazis.

“The recognition of Anfal as a genocide will have wider international benefits and achievements for Kurds and consequently Kurds will enter the list of the nations who have undergone genocide,” Ihsan said during a press conference in Erbil, on Monday, hours before the start of trial. “It (recognition of genocide) will be the best public diplomacy for Kurds in the world.” Several tons of documents and more than 1800 witnesses have been prepared for the trial, Ihsan said.

However, for many Kurds it is equally important that the Kurdish collaborators, publicly known as “Jash”, must be tried alongside Saddam as well. Many of these “Jashes” were pardoned by Kurdish political parties following the 1991 Uprising, after they agreed to fight against Iraqi army alongside Kurdish Peshmarga fighters.

But hatred against these people has not reduced among Anfal survivors.
“They (Jashes) were in the frontline of army units who raided our villages,” said Habiba Mohammed, 57, who lost five of his family members and close relatives during Anfal operations.

“They were more brutal than army units, because they submitted us to Saddam’s regime,” she added desperately, saying if those Jashes who were involved in Anfal were not tried “justice would no way be applied.” Like many other Anfal families in Rizgari, her family lives under harsh conditions with terrible public services.

To see Saddam in the dock was just a far-fetched dream for many Anfal survivors until not long ago. Yesterday many of those families got a chance to see that dream realized. “I wish to see Saddam killed the way he killed our loved ones,” said Nasrin, 33, a house girl from Rizgari, who lost his father and two uncles 18 years ago during Anfal. “Then we can feel some comfort and take a breath of relief.”

For this and other good news from Kurdistan check out Lawk Salih.