Coming soon to Dubai…
And, then to Europe since according to Libyan President Moammar Gadhafi Europe will be Muslim in a few dozen years anyway… 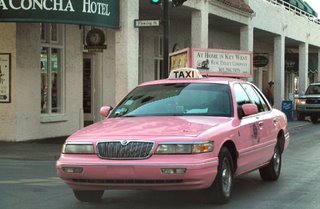 The moderate Islamic government in Dubai will deploy women only taxis starting in January:

Dubai’s transport authority has announced that some 50 pink taxis will be deployed on the streets of the emirate next year, beginning 1 January, catering exclusively for women. The taxis will be driven by national women drivers and will be available in places such as shopping malls, hospital and clubs, according to a report on the Dubai-based Khaleej Times. It will also be possible to book these special pink taxis over the phone.

Ammar bin Tamim, Director of Dubai Taxi Department at the Public Transport Agency in the Roads and Transport Authority (RTA) confirmed that 11 women had already been hired as drivers while another three were still under training. The drivers will also be tested on their ability to deal with their female passengers.

Bin Tamim said that the pink taxis would be different from those allocated for the airport which cater to families, as the pink cabs will strictly be for women.

The Libyan President Gadhafi also gave his assurance earlier this year that Muslims don’t need “the sword or the bomb to spread Islam,” except of course with FOX journalists.