A German official emails about the attempted train bombings near Cologne. 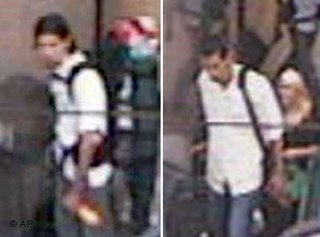 German police released photos of two men after they announced that the suitcase bombs found on German trains were likely part of a terror plot. One Lebanese man was arrested on Saturday. (Deutsche Welle)

This email was forwarded by Allen Roth at One Jerusalem from a friend in the German Senate (with permission) about the weekend terror busts in Germany:

Allen- You might have heard that two weeks ago two bombs rigged from gas canisters and hidden in suitcases were found on regional trains in Germany.

We know now that the devices were part of a foiled terrorist plot. Police have identified and arrested today the prime suspect, a 21 years old Lebanese electronic engineering student who lives in Germany since 2004. He and a second young man who is still missing were taped carrying the bags by a security camera on the train platform. The arrested suspects involvement is confirmed by DNA test results.

The police found hints leading to Beirut in the suitcases which would of course have been destroyed by a successful detonation. The two bombs were to be detonated simultaneously but failed to do so due to technical problems. Experts say that the explosion would have been on the same scale as the subway attacks in London in the summer of 2005.

We think that there is a group behind this attack. I will meet with state and federal police and intelligence people within then next week to learn more about the details of the plot.

** This is a strong message to all the people who think that Al Qaeda and other Islamic terrorist organisations will not attack Germany because we did not join the coalition against Iraq and are very half-hearted in addressing Iran (incl. Hezbollah).

I hope this will help to make people understand that Islamic terrorists attack western democracies not because of what they do but what they are.

German Blogger Davids Medienkritik has more on the terror bust from the German news.