Umar Islam, is the former Brian Young. Today he sits in jail. 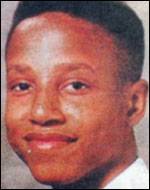 Via The Australian… “Umar Islam, a former Rastafarian who became a Muslim and changed his name from Brian Young, had moved from High Wycombe, north of London, to the East End of London, where he is employed as a ticket inspector. He is married to a Muslim woman who is the mother of his young child, and in 2004 he began to wear traditional Islamic clothes and pray five times a day.”

Waheed Zaman… is a follower of Tablighi Jamat, a missionary sect. The group’s preachers regularly visited the mosque where most of those arrested in East London worshipped. (The Australian)
Waheed has met George Galloway on several occasions.

Ahmed Abdullah Ali and his wife Cossar Ali planned on using their baby in a terror blast!

The deranged British parents planned to hide a liquid bomb in their baby’s bottle to bring down an airliner and murder themselves, innocent men, women, children, and sacrifice their 6 month old baby, Zain! (Daily Telegraph)

Abdul Wahib has not yet been charged. He was one of four suspects arrested in High Wycombe. 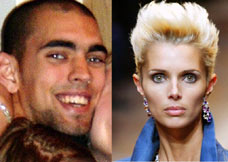 Supermodel Heather Stewart-Whyte, 36, once the face of Gucci, is the half-sister of Don Stewart-Whtye, 19, who converted to Islam six months ago changing his name to Abdul Wahid.

Here is Abdul with his first girlfriend before his conversion to Islam. 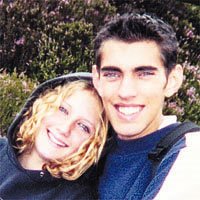 Tayib Rauf has not yet been charged but is suspected as being one of the ring leaders. 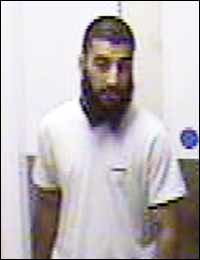 Tayib Rauf is seen at his father’s shop before the arrest. (BBC and Sun)

Tayib’s brother Rashid was arrested in Lahore, Pakistan. Rashid was once a member of the Kashmiri terror group Jaish-e-Mohammad, but left that group because it wasn’t anti-American enough, to join Al Qaeda. His family claims he is innocent.

Abdul Rauf, 52, the father of the two terror suspect brothers is also being held by officials for suspected financing of a terror group.

The Australian has more on those charged.

Here are the charges as they stand today as published in the Times Online:

THE CHARGES
Against eight suspects:

Between Jan 1, 2006, and Aug 10, 2006, with the intention of committing acts of terrorism engaged in conduct to give effect to their intention to smuggle the component parts of improvised explosive devices onto aircraft and assemble and detonate them on board

Against a 17-year-old male:

Between Oct 1, 2005, and Aug 10, 2006, had in his possession a document or record, namely a book on improvised explosives devices, some suicide notes and wills with the identities of persons prepared to commit acts of terrorism and a map of Afghanistan containing information likely to be useful to a person committing or preparing an act of terrorism

Between Jan 1, 2005, and Aug 10, 2006, had information which she knew or believed might be of material assistance in preventing the commission of another person namely, Ahmed Abdullah Ali aka Abdullah Ali Ahmed Khan, of an act of terrorism and failed to disclose it as soon as reasonably practicable

Between Sep 23, 2005, and Aug 10, 2006, had information which he knew or believed might be of material assistance in preventing the commission of another person namely, Nabeel Hussain, of an act of terrorism and failed to disclose it as soon as reasonably practicable.