Where’s the international outrage?… Where are the protests?

In late July… 28 people and 16 children were killed during an Israeli airstrike in Qana, Lebanon. This drew international protests from London to Toronto to Argentina!

In August… at least 29 Iraqis and most of them children have died while playing soccer by terrorists specifically targeting innocent Iraqis.
No international outrage…
No human rights investigations…

Children play soccer in the streets of Baqouba northeast of Baghdad. Terrorists later blew up bombs at a soccer match in Baqouba on Saturday killing four innocents. 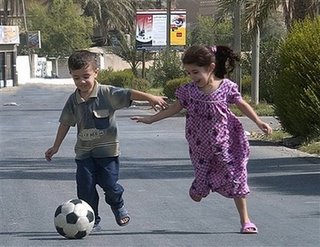 At least 12 people, many of them children, have been killed in bomb attacks while they were playing football in west Baghdad, police say.

Two blasts hit a makeshift pitch on waste ground in a mainly Shia district. About a dozen other people were hurt.

Police say the bombs had been buried in the middle of the football pitch.

Police say those killed and injured in Wednesday’s attack on the football game were aged between nine and 20.

Three other children were killed that day playing soccer on the streets of Baghdad.

On Friday August 4, 2006… a suicide bomber rammed his way onto a soccer field and blew up killing 10:

The officer, speaking on condition of anonymity, said that nine more police and three more civilians were wounded in the blast in the town of Al-Hadhar in Nineveh Province, 250 kilometres (160 miles) north of Baghdad.

Saturday, August 27, 2006… Now, today we hear that during a soccer match in Balad Ruz near Baqouba, four people were killed and 20 wounded in Iraq on Saturday.