The Muslim authorities did not want to kill them before the holiday. 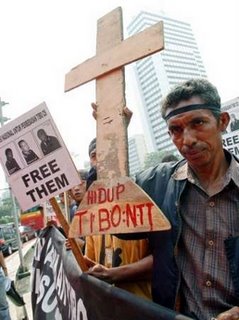 Indonesian Christians attend a rally against the impending execution of three Christian militants in Jakarta August 11, 2006. Fabianus Tibo, Dominggus Silva and Marianus Riwu were convicted and sentenced to death in 2001 after being found guilty of leading a Christian mob in an attack which killed more than 200 people at an Islamic boarding school during Muslim-Christian clashes in Central Sulawesi’s Poso region. The three men will face a firing squad, a spokesman for the attorney general has said. (REUTERS)

Three Christians convicted of leading a mob in attacks against Muslims were given a reprieve from the authorities:

Coffins had been prepared for Fabianus Tibo, Dominggus da Silva and Marianus Riwu in Palu, the provincial capital, while doctors were waiting to be taken to the secret execution site to pronounce them dead, officials said.

Pope Benedict XVI dispatched a request for clemency on their behalf to Indonesian President Susilo Bambang Yudhoyono, though officials denied the stay of execution had resulted from any international pressure.

August 17 is Indonesia’s Independence Day, with remissions typically granted to prisoners. Murderers, drug traffickers and terrorists are generally not considered although the president in theory could grant pardons to the three men. He has already, however, denied them clemency once.

Asked when the executions were now planned for, Sutanto said: “We will wait for reports from the police chief (in Central Sulawesi) but most likely it will be three days after August 17.”

World Net Daily ran a story on the three who claimed they were wrongfully convicted of murder during rioting in 2000.

During the violent clashes in 2001, an Islamic terrorist group called Laskar Jihad threatened to eliminate Christians from the region but was held off by government troops.