First a microphone was “mistakenly” left on to record Condoleeza Rice chewing out her Russian counterpart and sticking up for Iraq over lunch in Russia (June 30, 2006).

Today, the media pulled the same trick and caught George Bush live and unedited getting real on the current Mideast crisis with Tony Blair:

“Syria needs to stop this S—!” 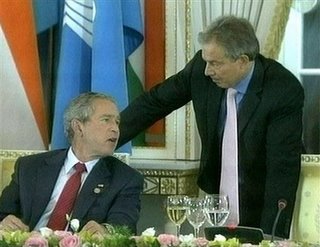 Today it was George Bush, the cowboy, cursing at Syria with Tony Blair at a G8 luncheon. Drudge reported:

It wasn’t meant to be overheard. Private luncheon conversations among world leaders, picked up by a microphone, provided a rare window into both banter and substance _ including President Bush cursing Hezbollah’s attacks against Israel.

Bush expressed his frustration with the United Nations and his disgust with the militant Islamic group and its backers in Syria as he talked to British Prime Minister Tony Blair during the closing lunch at the Group of Eight summit.

“See the irony is that what they need to do is get Syria to get Hezbollah to stop doing this s— and it’s over,” Bush told Blair as he chewed on a buttered roll.

He told Blair he felt like telling U.N. Secretary-General Kofi Annan, who visited the gathered leaders, to get on the phone with Syrian President Bashar Assad to “make something happen.” He suggested Secretary of State Condoleezza Rice might visit the region soon.

The unscripted comments came during a photo opportunity at the lunch. The leaders clearly did not realize that a live microphone was picking up their discussion.

Bush also spoke to other leaders, and his unscripted comments ranged from the serious topic of escalating violence in the Mideast to light banter about his preference for Diet Coke and a gift he received from another leader.

George Bush is even better offline than Condi is when she’s chewing out Russian Foreign Minister Sergei Lavrov and sticking up for the Iraqi government.

But what’s with the media’s sudden fetish with leaving the lunch microphones on for Bush Administration officials?

HotAir has the video from today’s luncheon.