Via Fausta, the Obrador VIDEO:

Before the Mexican election, June 2006:

Lopez Obrador stated he’d respect the IFE’s final decision, even if it meant he lost, “because he’s a democrat”. The woman interviewer actually asked, “Even if you lose by ONE vote?” and he said “Yes”.

(My favorite segment is when he promises the Mexican Muppet that he will respect the final decision!)
But that was then… 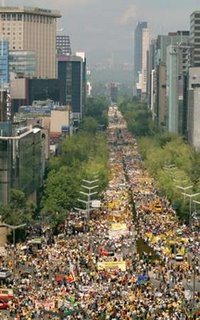 Thousands of supporters of Andres Manuel Lopez Obrador, presidential candidate for the Party of the Democratic Revolution (PRD), march in Reforma avenue to protest against the result of the elections held two weeks ago in Mexico City, July 16, 2006. (REUTERS/Daniel Aguilar)

Via Instapundit and Pajamas Media :

Lopez Obrador has vowed never to accept the victory of conservative Felipe Calderon, and Sunday’s rally — the biggest in Mexico City history, according to city officials — was a show of strength in a campaign to overturn the results of the July 2 vote.

Publius Pundit has much more on Sunday’s massive march.