A Bosnian war crimes criminal is given a hero’s welcome after the Hague released him. He served only only 2 years for his crimes.

The Bosnian Muslim officer oversaw forces responsible for killing over 3,000 Serbs in the early ’90’s. 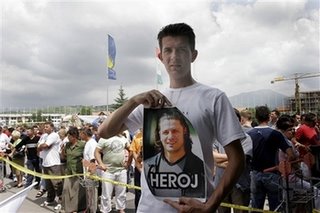 A man holds a poster with the picture of war time commander of Srebrenica, Naser Oric, saying ‘Hero’ at the Sarajevo airport Saturday, July 1,2006. The U.N. war crimes tribunal in The Hague, Netherlands, imposed on Oric a lenient two-year sentence Friday for failing to prevent murder and torture of Serb captives, and ordered his immediate release since he has already been in jail for more than three years. Oric was acquitted of direct involvement in the murder of prisoners in the early years of the 1992-95 Bosnian war.(AP Photo/ Hidajet Delic)

Over 3,000 Serbians were killed by forces under Oric’s command:

Prosecutors had asked for an 18-year jail-term for Oric, who was sentenced by the UN’s International Tribunal for War Crimes in the Former Yugoslavia (ICTY) to two years in jail for failing to prevent men under his command killing and mistreating Serb civilians in the town of Srebrenica in 1992-1993. Oric was immediately released however, because he had already served three years in detention. Some 3,000 Serbs were killed in Srebrenica under Oric’s command, according to Serb sources…

…”We have documents showing that 3,260 people were found dead around Srebrenica from 1992-1995, and 50 are still listed as missing,” said Mladenovic. “All the evidence shows that these crimes were committed by the units under Oric’s command”, Mladenovic added.

Serbians called the light sentence given by The Hague Tribunal a mockery of Justice:

Prime Minister Vojislav Kostunica was quoted by B92 as saying that the sentence “is an open mockery of justice and the innocent victims.

“The Hague tribunal, which was conceived as the highest instance in world justice, is becoming its exact opposite, injustice, with sentences such as these,” Kostunica added.

President Boris Tadic also protested the “inappropriately light sentence,” adding that the tribunal has to impose strict punishment for the sake of its credibility and legitimacy.

In an open letter to ICTY Chief Prosecutor Carla del Ponte, former Justice Minister Vladan Batic said that the sentence given to Oric “is an insult to the families of the victims, international law, morality, and common sense.”

Anton Nikiforov, spokesman for the ICTY prosecution, said he was surprised by the leniency of the judges.

However, Humanitarian Law Fund director Natasa Kandic said that the sentence was a reflection of the evidence produced against Oric before the tribunal.

Defense Minister Zoran Stankovic has said he will demand a retrial. In a statement to B92, he said he sent the international court 120 reports dealing with autopsies he performed on Serbs murdered in Zvornik, Skelani, and Kravice.