The situation in the St. Louis region has gone from bad to worse:

As Ameren was still scrambling to restore service to hundreds of thousands of customers who lost power Wednesday, the new storms sent the number of power outages skyrocketing, to more than 543,000. As of 7:30 p.m, that number had dropped to 520,000.

On Wednesday night, 570,000 lost power when the first storm blasted the area.
300,000 had their power restored.
200,000 more lost their power after the storm today hit the area.
Tonight, 520,000 are without power.
There seems to have been a mistake with the initial estimates. 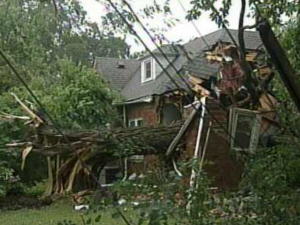 A tree destroyed this house in Trenton, Illinois, where a tornado may have hit Friday. (KSDK)

Here is the current power outage map from Ameren UE as of 8:00 PM CST. 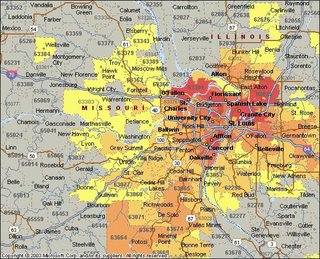 The darker shades are the more populated regions.
The good news is that the temperatures are supposed to drop out of the high 90’s this weekend.

St. Louis officials blasted Ameren UE today as the situation in the area worsened after the second storm on Friday morning:

Before Friday’s storm, Ameren said it had whittled down the number of metro area customers without power to 320,000 on Friday afternoon, compared to a peak of about 590,000 immediately after Wednesday night’s storm.

Meanwhile, St. Louis Mayor Francis Slay blasted Ameren officials for being “very, very vague” about when power would be restored to the city.

“They don’t really promise anything specifically – I think intentionally so,” Slay said in a briefing to aldermen at City Hall. He later added: “This is a life or death situation.”

Slay, who met Thursday with Ameren’s chief operating officer, said the company needs to act quicker and communicate better with the city. Slay said that 55 percent of the city was without power, including his own home in the Lindenwood Park neighborhood, which had electricity Thursday night but lost it Friday morning.

“Where is Ameren? I only saw one truck in my ward,” said Alderman Kenneth Ortmann, who represents the city’s near South Side. “Somebody’s got to get to (AmerenUE) and wake them up.”

Alderman Donna Baringer, who represents the St. Louis Hills neighborhood, said that a resident in her ward who had a live power line knocked loose by a fallen tree had tried to reach Ameren. “They could not get through,” Baringer said. “They were hysterical.”

Previously on the “Mother of all Midwest Storms”:
Storms Whack St. Louis- 467,000 Without Electricity

Update: (Saturday 9:00 PM CST) There are still over 400,000 without electricity in the St. Louis area!
Here is the latest power outage map.
(Thank goodness my electricity came back on this morning.)

** The latest news including pictures I took on Sunday- HERE.