150 missiles have been shot at Israel from the Qana village. (FOX)
144 rockets were fired into Israel today! 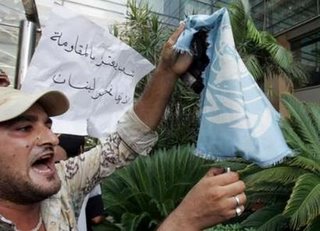 A Lebanese man sets fire on a United Nations (UN) flag at the entrance of the UN headquarters in Beirut July 30, 2006. (Reuters)

The UN offices in Beirut were ransacked after the deaths were reported from Qana,
Reuters VIDEO HERE

The BBC reports from Qana village, VIDEO HERE.
54 civilians including 34 children were killed in the Qana attack as Israel responded to Hezbollah rocket fire from the area.

The death and injuries were only reported 7 hours after the blasts. Israel had warned civilians numerous times to leave Qana. 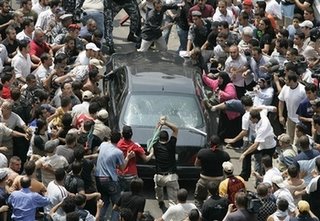 Supporters of Hezbollah and the Shiite Amal movement allied to the Hezbollah furious over an Israeli airstrike in Qana that killed up to 50 refugees, smash the car of the Chief of the Lebanese Police Ashraf Rifi in Beirut, Lebanon Sunday, July 30, 2006 after around 5,000 protesters massed outside the empty UN building, chanting anti-American and anti-Israeli slogans. Dozens of angry demonstrators, carrying yellow flags of the militant Hezbollah group and chanting ‘we are all resistance,’ climbed over the two-meter high fence outside the U.N. office in downtown Beirut. They then broke glass and burnt a U.N. flag. A few protesters managed to break into the building and damage some of its offices. (AP Photo/Hussein Malla)

Powerline has serious questions about the timing of the collapse of the Qana building.
Blue Crab Boulevard has more thoughts on this disaster today.

EU Referendum has amazing analysis of the photos coming from the disaster. (warning- they are guresome)
Hat Tip Larwyn