In April 1997, Earl Woods, an educator, top-ranked college ball player, and Green Beret who served in Vietnam, revealed the secrets of instruction and training that went into raising a child that might be the greatest golfer ever with his best seller:

“Training a Tiger: A Father’s Guide to Raising A Winner In Both Golf and Life”

Earl was a father, mentor and best friend to Tiger Woods.
In May of this year Earl Woods passed away after a long battle with cancer. Tiger Woods released this statement on May 3, 2006:

I’m very saddened to share the news of my father’s passing at home early this morning. My dad was my best friend and greatest role model, and I will miss him deeply. I’m overwhelmed when I think of all of the great things he accomplished in his life. He was an amazing dad, coach, mentor, soldier, husband and friend. I wouldn’t be where I am today without him, and I’m honored to continue his legacy of sharing and caring. Thank you to all who are sending condolences to my family and our Foundation. We are truly blessed to have so many who care during this difficult time.

Up to this weekend, Tiger Woods had not won a tournament since the passing of his father in May. 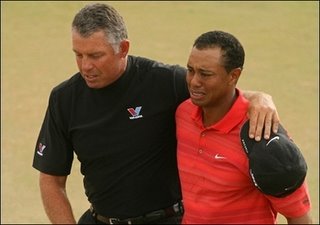 An emotional Tiger Woods of the United States (R) walks with his caddy Steve Williams after winning the 135th British Open Golf Championships in Hoylake, Liverpool, north-west England, on July 23. Woods may have worn his heart on his sleeve on the 18th green after capturing his third Open title here on Sunday but it was a heart of stone he showed in despatching his rivals.(AFP/Alessia Pierdomenico)
Congratulations, Tiger! Your father would be proud.