Tony Blair Hits Back at Muslims Who Blame UK for Extremism

A poll released yesterday reported that 13 percent (or 208,000!) of Britain’s 1.6 million-strong Islamic community think the July 7 bombers should be regarded as “martyrs”. A British Muslim member of Parliament blamed the government for the extremism. 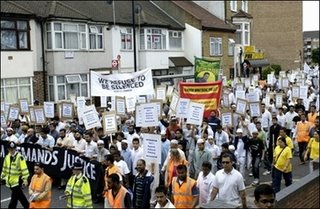 Prime Minister Tony Blair hit back at Muslim leaders who say the government is not doing enough to engage better with the Muslim community following the tube bombings from last year:

The government cannot alone root out extremism in Muslim communities and defeat the terrorism it creates, Prime Minister Tony Blair has said.

He hit back at claims ministers had done little to win Muslim “hearts and minds” since the 7 July London bombs.

He said he was “probably not the person to go into the Muslim community”.

It was down to moderate Muslims to stand up to extremism and tell those with “grievances” against the West they were wrong, Mr Blair told MPs.

“In the end, government itself cannot go and root out the extremism in these communities.

“I am probably not the person to go into the Muslim community … It’s better that we mobilise the Islamic community itself to do this.

“I know everyone always wants to blame the government for everything that is happening …. but we can’t defeat this extremism through whatever a government does.”

“We can only defeat it if we have people in the community who are going to stand up and not merely say ‘you are wrong to kill people through terrorism… you’re wrong in your view of the West, the whole sense of grievance, the ideology is wrong, is profoundly wrong’.”