The Libs are outraged with President Bush, this time claiming that he “groped” German Chancellor Merkel.
Outside the Beltway has the abbreviated video that does not put the scene in context.

Funny, democrats weren’t too upset with all of Bill Clinton’s groping. 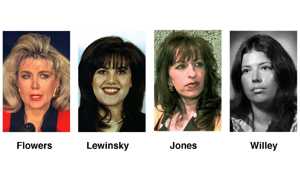 At least Bush does his touching in public!

This photo was taken after Bush just touched Chancellor Merkel.

She doesn’t seem too bothered at this point.
I’m not advising unwarranted touching, but this story is crap!

Dan Riehl doesn’t see what all the hype is about.
AllahPundit is SHOCKED!
Kevin Aylward at Wizbang wades through the fever swamp.
Jeff Goldstein wonders what the chancellor was wearing that would lead Bush to transgression.