Freedom for Egyptians celebrates Independence Day in the United States this year. 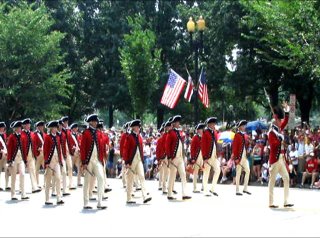 And, here is part of her reaction to this Most American of Holidays:

Parades on national occasions in the U.S. are family get togethers and a true celebration. Adults and children are dressed with the colors of the American flag or having flags in their hands to wave.

I had never seen such a great love. There were two young girls next me cheering the bands as if they were in a staduim according to my Egyptian standards. They did not look as if they were celebrating a major national occasion. It is a country that gave a lot to its citizens. They take pride in being U.S. citizens and being part of this nation.

Read the rest. It is amazing what we take for granted in this country.

Stefania, at Free Thoughts from Italy, congratulates America on her birthday.

Chan’ad Bahraini puts things in perspective as he describes the foreign mercenaries working for the government in Bahrain.

The Spirit of Man (Iranian-Canadian) offers a Happy 4th of July to his international readers.

Big Pharoah is worried about Mama Moonbat on this 4th of July.

In Germany, after jabbing America for years about closing the barbaric prison at Gitmo, Germany now says that they will only take 2 out of the 4 German Gitmo detainees… Happy Birthday America! Love ya!