From The American Thinker:

An unscientific poll of posters at a Democratic Underground discussion board yields a result that maybe isn’t so surprising: 72% of those responding say they are “dealing with severe mental illness in their home.” Based on the URL, this appears to be genuine, not a spoof.

Whether DU posters are reporting on themselves or close relatives remains an open question.

Here is a look at that poll at the Democratic Underground: 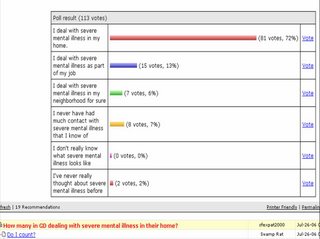