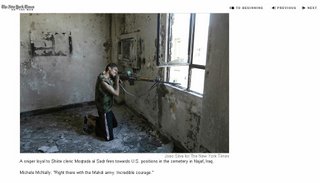 “A sniper loyal to Shiite cleric Moqtada al Sadr fires towards U.S. positions in the cemetery in Najaf, Iraq.”

Michele McNally: “Right there with the Mahdi army. Incredible courage.”

Jeff Goldstein explains how the NYT officially severed ties with their own country with this photo.

In another similar story today…
Blackfive answers the age-old question about the patriotism of the Left.

Jim Hoft
Jim Hoft is the founder of The Gateway Pundit, one of the top conservative news outlets in America. Jim was awarded the Reed Irvine Accuracy in Media Award in 2013 and is the proud recipient of the Breitbart Award for Excellence in Online Journalism from the Americans for Prosperity Foundation in May 2016.
Dirty Cop Rosenstein Tosses Fired FBI and Comey Under the Bus - Says He Recommended his Firing Due to His Attempts to Influence 2016 Campaign
Rod Rosenstein Testifies Before Senate Judiciary Committee - Tosses Andrew McCabe Under the Bus (VIDEO)
CNN Hack Chris Cuomo Encourages More Violence and Rioting in Democrat-Run Cities (VIDEO)
"I'm Here to Tell Your Story" - Black Lives Matter Mob Beats the Hell Out of Reuters Photographer in DC Street (VIDEO)
Two George Floyd Rioters Arrested for Torching MN Courthouse with Molotov Cocktails
See more...