A Syrian made rocket (it may have been a missile!) kills 9 in Haifa.
Israel warns southern Lebanon that an intensified air campaign is coming,
FOX Video HERE.

Iran warns Israel of unimaginabale losses if Syria is hit! 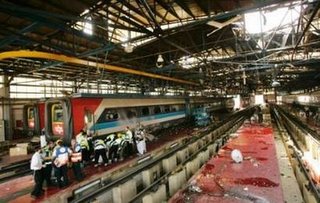 Israeli rescue workers cover a victim’s body at the scene of a rocket attack in Haifa July 16, 2006. Israel raised the alert level in the commercial capital Tel Aviv on Sunday following a barrage of rocket fire by Lebanese group Hizbollah on Haifa that killed eight people and wounded 20. (REUTERS/Barkay Wolfson) 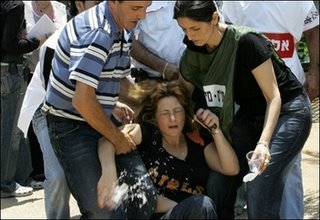 An Israeli woman collapses at the Ramam hospital after hearing that her brother was killed in the northern coastal city of Haifa after rockets fired from southern Lebanon crashed into the city. Eight people were killed in a Hezbollah rocket attack on Israel’s third largest city as Israel continued to pound Lebanon on the fifth day of a spiralling conflict that has already cost scores of lives but spurred little international action.(AFP/Gali Tibbon)

A barrage of rockets pounded the northern Israeli city of Haifa in the worst strike on Israel since violence broke out along the border with Lebanon last week. One of the rockets hit a storage room at the train station, killing nine people, Israeli police said. Many more people were wounded. 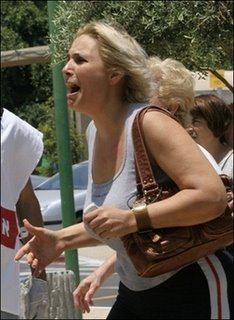 An Israeli woman reacts at the Ramam hospital in the northern coastal city of Haifa where victims and injured were brought in following a rocket attack on the city. Prime Minister Tony Blair has said there was an “arc of extremism” across the Middle East and the world would rue the consequences of failing to resolve the burning issues there.(AFP/Gali Tibbon) 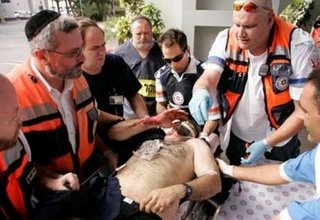