No Bush, No Nukes, No Gitmo… No Gitmo Transfers, No Way! 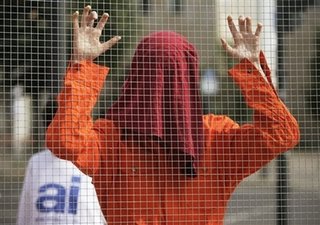 Members of the Amnesty International human rights organization protest against Guantanamo prison camp on Cuba, near the U.S. embassy in Berlin on Wednesday, July 12, 2006. U.S. President George W. Bush will arrive for a two-day state visit to Germany later in the day. (AP Photo/ Jan Bauer)

Despite the demanding signs of the Amnesty International and Green Party activists, the morally superior Germans are suffering from Gitmo hypocrisy. Davids Medienkritik explains:

The German government’s position on Guantanamo is crystal-clear: Close Guantanamo!

I mean, that’s great! The undisputed champion of human rights – Germany, of course – could finally show the world how to deal with terrorists in a democratic fashion!

Except, these aren’t exactly the type of guys you’d have over for dinner.

Therefore, unsurprisingly, Germany is willing to take only two of them, at best.

Remember that when you hear all of the Gitmo talk this week while Bush is in Germany. 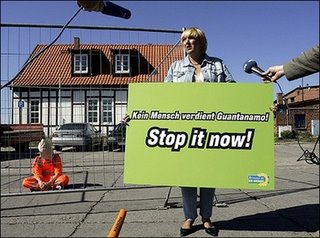 Claudia Roth(R), chairman of Germany’s ecologist Greens party, holds a poster reading “Nobody deserves Guantanamo – Stop it Now!” as she stands beside a demonstrator dressed as a Guantanamo prisoner in Stralsund to protest against US President George W. Bush’s visit to Germany.(AFP/DDP/Jens Koehler)

Oh, and from these pictures, it looks like the Amnesty International gang, once again, did not have much support from the locals. 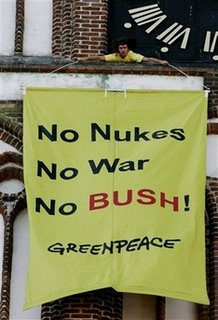 Another protester did not have as much success with his nuke protest:

Though anti-Bush protesters gathered, thousands of police were keeping most far from the areas Bush will tour.

But before the president’s arrival from an overnight in a resort town on the Baltic Sea, a representative from the environmental group Greenpeace struggled to display a yellow “No War, No Nukes, No Bush” banner from the church’s clock tower.

After several unsuccessful tries, the protester switched to a smaller version. He then managed to deploy the large banner, but it hung for only a few minutes before appearing to slip and flutter about five stories to the ground.