The Israeli security cabinet just approved plans to strike out at Palestinian institutions that promote terrorism. 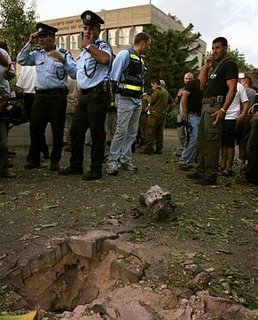 Police officers stand next to the site where a Kassam rocket landed near a high school in Ashkelon, Tuesday. (AP)

This comes from Israel…

As the tension mounts between Israel and the plethora of Arab terrorist organizations that claim responsibility for the kidnapping of IDF Corp. Gilad Shalit, we sit glued to news reports of any developments. Our hearts go out to the family of Corp. Shalit and we lift our voices to Heaven and beseech the Almighty G-d of Israel to return Corp. Shalit, alive and well to his family and to his nation.

We offer prayers and supplications to Hashem for his speedy release and we ask Hashem to provide comfort and strength to Corp. Shalit’s family and friends.

As “Operation Summer Rains” continue in Gaza, israelinsider.com reports that, “Israeli aircraft sent missiles tearing through the office of Palestinian Prime Minister Ismail Haniyeh on Sunday, in an unmistakable message to his ruling Hamas group to free an Israeli soldier.

Prime Minister Ehud Olmert said the military was ordered to do “everything” within its power to return the captured 19-year-old corporal, and cautioned that arrests of senior Hamas officials could spread to Gaza, the Islamic militant group’s power base, a confidant said.

Defense Minister Amir Peretz, meanwhile, said Israel would go after “higher-caliber targets” in the future — a reference to senior Hamas officials inside and outside of the Palestinian territories, a political ally said…

Israeli forces struck a Gazan school last night that was a suspected meeting place for terrorists at night.