25,000 South Koreans protested against a free trade agreement with the United States in Seoul on Wednesday… 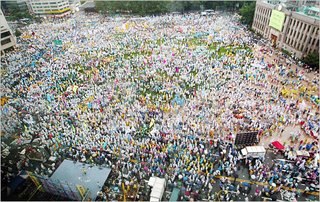 …But, for 3 Swiss tourists, it was not the best day to be mistaken for being American.

A Swiss man and two friends were set upon by a mob of angry protestors who apparently mistook them for Americans on Wednesday. The group of 10, who were taking part in a Gwangwhamun rally to protest against an FTA between Korea and the U.S., approached the man and his friends shouting abuse in Korean, most of which he could not understand. 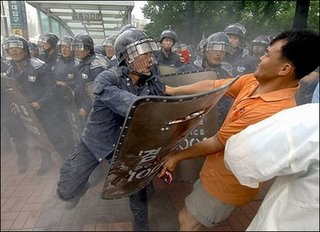 South Korean protesters scuffle with riot police during an anti-FTA rally in Seoul. US negotiators boycotted discussions on medicines in talks with South Korea, clouding prospects for the early conclusion of a free trade deal, officials said.(AFP/Jung Yeon-Je)

Not even the mother’s of policemen are safe in the current environment!