7 members of the 80 member New York Delegation to state office in Albany (6 of them democrats) have faced charges in the last 3 years.

That makes the lawmakers more likely than the general population to be criminals! 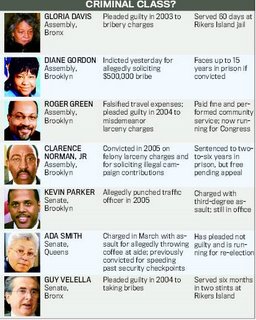 “Ada was accused of throwing hot coffee in the eyes of Jennifer Jackson of Albany, then a staffer.

The senator also pulled a hairpiece from Jackson’s head. Jackson said she suffered injuries to her corneas, neck and shoulder, according to court documents.”

** Mr. Green is now running for US Congress!

Calling the scheme an example of “classic textbook style corruption,” the head of the city’s Department of Investigation, Rose Gill Hearn, said that Ms. Gordon spent “many hours” reviewing architectural plans for the proposed home, which was to be built off Linden Avenue in Queens. She made requests over the layout of bathrooms, closets, and balconies, Ms. Hearn said.

But the developer whom she expected to build the home for free was in fact videotaping the meetings for prosecutors, the Brooklyn district attorney, Charles Hynes, said yesterday at a press conference announcing the 12-count indictment.

The home,Ms.Gordon asked for was to “be separate and not attached” to those of her constituents, said one prosecutor, Kevin Richardson, during the arraignment yesterday.

In Ms. Gordon’s mind, Mr. Richardson said, anything else would “have been beneath her.”

Mr. Udell, her attorney, said that Ms. Gordon would run again this year to represent the 40th assembly district.

She left court in a blue Cadillac Escalade that was waiting, engine running, for her at the curb.

And, if you think that is bad…
Redstate points out that democrats are using images of dead US soldiers in their latest commercial.
Patrick Hynes has more on the democrat’s dead soldier video.