On Wednesday, 7/5/06 Al Qaeda released a video to coincide with the anniversary of the 7/7 tube bombings. The video showed 7/7 London bomber Shehzad Tanweer warning of further Islamic extremist attacks because of Western intervention in Iraq, Afghanistan, Palestine and Chechnya.

The video left the BBC asking, “Were bombers linked to al-Qaeda?” 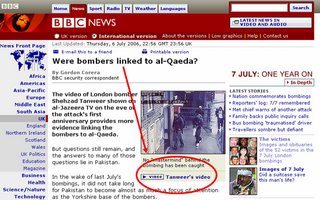 To make it easier for the BBC, al Qaeda released another video on Friday that reveals two of the homicide bombers attended an al Qaeda training camp in Pakistan.

The video released on Friday leaves no doubt that the 4 London bombers on 7/7 were at least supported by the Al Qaeda network:

Al-Zawahiri said that while at the camp, Tanweer and Khan paid no heed to militants who discussed matters unrelated to suicide attacks, “because the goal for which they came to al-Qaeda’s jihad base was to carry out a martyrdom operation.”

A security analyst at the London think-tank Chatham House, Bob Ayers, said the claim contradicted the British police finding that there was no evidence linking the four London bombers to al-Qaeda.

“It makes the police look pretty bad,” Ayers said. “It means the investigation was either wrong, or they had identified links, but were reluctant to reveal them.”

The 31-minute video appeared on an Islamic website known for carrying militant messages and was released to coincide with the first anniversary of the London bombings. A heavily edited version was broadcast Thursday by al-Jazeera television.

“The coordinated timing of the tape shows these guys did not act independently and were at a minimum supported by al-Qaeda if not recruited, trained and supported by them,” Ayers said.

Azzam the American makes an appearance. 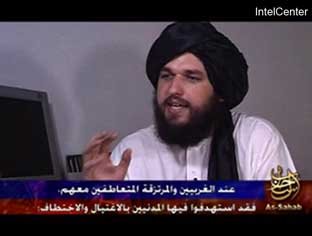 California citizen, Adam Gadahn, made an open appearance in an Al Qaeda video on Friday:

For the first time, a former Orange County, Calif. teenage rock music fan has revealed his role as a top al Qaeda leader.

Adam Gadahn, who disappeared from California seven years ago, appeared unmasked on an al Qaeda tape made public on the internet today.

As previously reported by ABC News, the FBI had concluded that the masked man was Gadahn based on voice analysis of previous al Qaeda tapes. On today’s tape, Gadahn is bearded, wearing a turban.

He denounces U.S. soldiers in Iraq and their alleged murder and rapes of Iraqi citizens.

The BBC is strangely silent on the latest al Qaeda video released on Friday.