You can run, moderate democrat, but you can’t hide!

It’s too bad they can’t shake the far left even for a weekend. 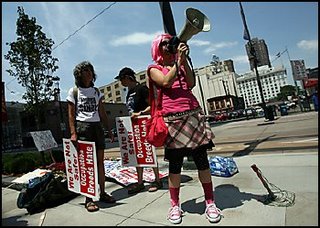 Liz uses a bullhorn to amplify her message to passers-by and attendees at the Democratic Leadership Council annual conference outside the Hyatt Regency in Denver. Liz is the group co-ordinator for the Denver/Boulder chapter of Codepink. Democrats from around the country gathered Sunday in Denver, asking themselves how the party can convince voters to give them control of Congress and the White House. (Rocky Mountain News)

And, it wasn’t just Code Pink…

Liberal democrats protested outside the small gathering of moderate democrats at a Colorado convention this weekend. They were particulcary angry with Hillary Clinton for acting like “Israel’s bitch” by supporting the Jewish state in the current conflict. 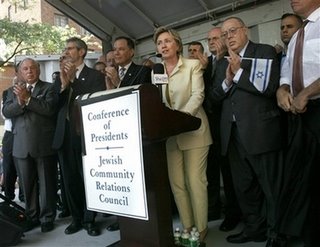 The liberal democrats protested their democratic brethren at a Colorado convention this weekend of “moderate Democrats”. From the looks of the speaker list at the convention, we can now assume that the media has placed Hillary, or “Israel’s bitch”, depending on which democrat you are talking to, into the moderate grouping of democrats:

The council also got a hostile reception from about two dozen protesters who marched and hoisted signs on the sidewalk outside the hotel where the conference was taking place.

“DLC, where you been? You’re acting like Republicans!” the demonstrators chanted.

Most protesters expressed opposition to the war in Iraq. Some criticized Israel’s ongoing military campaign against Hezbollah in southern Lebanon. “DLC Genocide, DLC Hates Most Semites,” one sign said.

Mrs. Clinton was singled out for particular disdain for her support of Israel in the current fighting.

One protester carried a sign that said, “Hey Hillary, It Takes a Village to Resist Imperialism.”

“I believe she is acting like Israel’s bitch,” a public relations consultant from Boulder, Colo., Linda Mamoun, 36, said.”She’s not at all thinking about what’s right but about how she can get the most votes.”

California Conservative says the convention goers offered more of the same doom and gloom policies against the Bush Administration.

Meanwhile, back in Connecticut today, the liberal democrats continued to hound Joe Lieberman and his guest Barbara Boxer.