– the man who would not allow the parents of his dead wife to view her body when she was alive
– or dead
– then did not tell them about her funeral
– or what he did with her ashes,
– and promised to have her remains buried in Pennsylvania, but didn’t
– and then gave her family, the Schindlers, a final FU on her gravestone is heading to Connecticut to campaign for Ned Lamont!

No matter what your thoughts are about the life and death of Terri Shiavo, this guy is one scum bucket.

The democrat positioned to oust moderate Joe Lieberman from the Senate is getting help from outside the state. 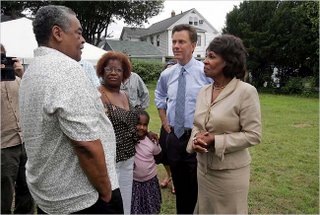 Ned Lamont, in tie, also campaigned in Bridgeport Sunday, as he and Representative Maxine Waters of California, right, chatted with State Senator Edwin A. Gomes. (NYT)

Michael Shiavo, is heading to Connecticut to campaign for Kos candidate, Ned Lamont:

Michael Schiavo, the former husband of Terri, is headed to Connecticut to stump for Ned Lamont on Friday, accompanied by doctors and lawyers. Mr. Lamont says his opposition to Senator Joseph I. Lieberman had a lot to do with the senator’s support to allow the federal court to consider keeping her on a feeding tube.

“There ought to be a huge distance between my hospital room and the federal government,” Mr. Lamont says.

And Michael Schiavo is backing other candidates this year with his political action committee (TerriPAC)to counter the politicians he says made a “mockery” of “fundamental freedoms.”

For more on how democratic campaigner Michael Shiavo treated his brain dead wife see this article published in 2004 in The Weekly Standard.