Democrats like John Kerry have vowed to fight the nomination (of John Bolton). Kerry showed up at the very last minute of today’s hearing and it turned into a barbed exchange between the Bush Administration’s attempt to engage North Korea in 6 party talks: 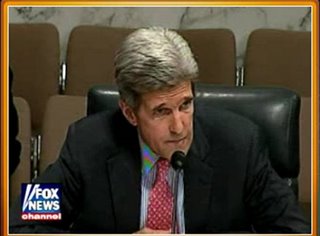 John Kerry: This has been going on for five years, Mr. Ambassador.

John Kerry: Why not engage in a bilateral one and get the job done? That’s what the Clinton Administration did. 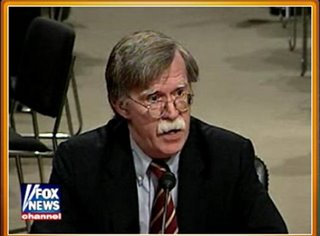 John Bolton: And, very poorly since the North Koreans violated the agreed framework almost from the time it was signed.

And, talk about a flip flop… Isn’t John Kerry the presidential candidate who slammed Bush for going it alone?

“But this president hasn’t even held the kind of statesman-like summits that pull people together and get them to invest in those states. In fact, he’s done the opposite. He pushed them away.”)

The CSPAN video of the hearing is even more devastating for the Massachusetts Senator (minute 3:20 of the clip)

What does he get for his trouble? The following:

“No, this is going to be a bruising fight,” said the Connecticut Democrat and Foreign Relations panel member. “I regret this. I’m sorry the administration wants to go forward with this. The problems still persist. … Many ambassadors at the U.N. feel that he hasn’t done a good job there. He has polarized the situation.”

“Many ambassadors at the UN…” Like who, for instance? Iran perhaps? Maybe Syria? Maybe some of the countries that profited from Saddam’s “Oil for Money” shenanigans?

Korea Liberator says pompous-yet-shallow is not an endearing combination.

More…
Texas Rainmaker has more on Kerry lying.
This makes all the work done by the liberals at Mahablog look even more ridiculous.