Via Stefania…
Brussels Journal reports that Jews are under attack in the progressive’s mecca of Norway.

Here is a recent cartoon posted in a popular Norwegian newspaper, Dagbladet. 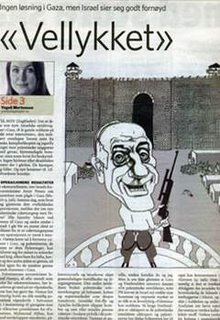 Brussel’s Journal…
The cartoon shows Israel’s Prime Minister Ehud Olmert as a Nazi commander in the concentration camp of Auschwitz. The scene comes from the movie Schindler’s List, in which the commander shoots down a random Jew from his balcony.

For the sake of clarity: Finn Graff is the same cartoonist who declared only half a year ago that he would not draw a cartoon about Muhammad out of fear and “respect.”

** You don’t suppose we’ll see the Jews rioting and torching the Norwegian Embassy in Israel now, do you?

Gates of Vienna has more on the growing anti-Semitism in Europe.