As Israel continues its offensive into southern Lebanon, Condi Rice prepares for her trip to the crisis area where she will focus on Hezbollah, the ones behind this latest round of madness. 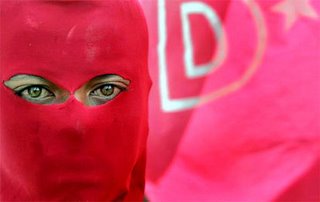 A Palestinian militant marches during the funerals of Palestinians killed by Israeli troops, in Maghazi refugee camp in the central Gaza strip. (Hindustan Times)

The Leftists at the Huffington Post are embarassed that Jews are using “excessive force.”

Counterterrorism Blog is tracking the battles.

Iraq the Model explains how the situation in Lebanon is affecting Iraq and also has some very interesting news about the sectarian violence in Iraq.

Little Green Footballs reported on how the United Nations presided over a barbaric photo op.

Dr. Sanity has her weekly list of insanities, this week from Israel!

And, Pajamas Media continues to have all of the news both from the blogs and mainstream in their coverage of the crisis.