The mullahs distributed and set up the Hezbollah flag in the Parliament of the Islamic Republic of Iran. 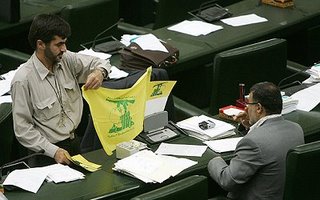 But, as Bahman reports, not everyone is happy about the regime’s support of Hezbollah:

The Iranian people’s rage and hatred for Hezbollah, the vicious terrorist organization and it’s Mullah masters is to the extent that even the Islamic regime’s own newspaper cannot deny it and are forced to confess to it. 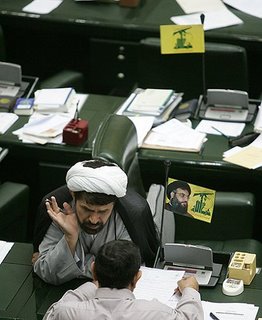 The regime-run newspaper Aftab’eh Yazd in it’s phone message bank where readers of the newspaper can leave messages received messages saying: “Pray tell us, how on earth are we related to this Seyed Hassan Nasrallah whose photos have been plastered all over the country?!”

The next message warns that the terrorist leaders better stop taking the money the Islamic regime pays them because first of all that money does not belong to the Mullahs [to dole out], but to the Iranian people and because Iranians people are wholly infuriated.

The following message says: “Hassan Nassrollah, the coward is hiding out while the people of Lebanon are paying his price.”

And finally another caller says: “How dare the Islamic Republic of Iran’s Radio and Television reporters reporting from Beirut and are embedded with Hezbollah guerrillas refer to these terrorists as ‘our boys’? They’re no relation to the Iranian people; they’re cursed terrorists!”