An Islamic LeT leader was picked up in Kenya this week. Besides being wanted in India he connected to the bombing in 2002 of an Israeli hotel in Kenya and was on the FBI’s most wanted list. 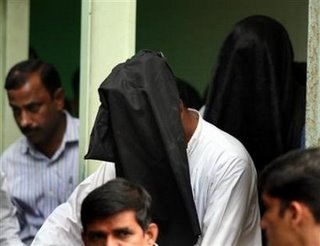 The most wanted terrorist and deputy commander of the terror group LeT was arrested in Kenya today after being on the lam for years.

And, Three terror suspects were arrested in India for taking part in the Mumbai blasts last week that killed over 200 individuals.

“We have definite evidence that these people are linked to terrorist activities,” one of the police investigators, K.P. Raghuvanshi, said about the arrests in India. “They have connections with groups in Nepal and Bangladesh, which are directly or indirectly connected to Pakistan.”

[Meanwhile, the Kenyan authorities Friday arrested a terrorism suspect who may be connected with the Mumbai attacks, Agence France-Presse reported.

[The Kenyan police said they had detained Abdul Karim Tunda, one of India’s most wanted men. He will be turned over to prosecutors for possible extradition to India, they said.]

Raghuvanshi identified the suspects in Mumbai as Khaleel Aziz Sheikh, Kamal Ahmed Ansari and Mumtaz Ahmed Chowdhury, but declined to give further details. “We will place the evidence before the court,” he said.

Two of the suspects were detained in the northern state of Bihar and were transferred to Mumbai for questioning Thursday, said the chief of the police in Bihar State, Ashish Ranjan Sinha. Television stations reported that the third man had been detained in Mumbai.

The “Mumbai anti-terrorist squad came and sought these arrests,” Amrit Raj, the police chief in the district where two of the men were arrested, said. “Two mobile phones and a white powder in a small bottle were recovered from them. The nature of the white powder will be known after investigations.”

Wearing black hoods over their heads, the three men made a brief court appearance in Mumbai, and were remanded into police custody for 10 days.

“We believe these three have knowledge of the attacks. Some of their links with certain networks have come to light,” a senior police official, who requested anonymity, told Reuters.

…The three arrests in India were thought to be the first formally made in connection with the bombings.

The police have indicated unofficially that they suspect an Islamic militant group, Lashkar-e-Taiba, based in Pakistan and fighting Indian rule in Kashmir, helped orchestrate the attacks, but no evidence has been publicly produced to support the assumption.

LeT leader Tunda has been sought by authorities for years after several bombings and at one point was thought to have died in Bangladesh. This is a huge terror catch for India. Tunda is the deputy commander of Lashkar’s India operations :

Tunda is wanted by Delhi Police in as many as 33 cases of bomb blasts in Delhi and its adjoining states.

Tunda is also the main-accused in the 43 low-intensity blasts which rocked Mumbai and Hyderabad in the mid-nineties. He was said to be the man behind the seven blasts in trains on December 6, 1993, exactly a year after the demolition of the Babri mosque.

Austin Bay says the Indian media is playing down the arrests.
Liberty and Justice says that five have now been arrested.
Captain’s Quarters has more on the terrorist group that is very interesting.