Lt. Col. Alexis Fecteau would spray-paint cars with bumper stickers supporting President Bush! He was set up with a Pro-Bush bait car.

Smirking Chimp thinks it may be PSTD instead of BDS (Bush Derangement Syndrome):

“PTSD? How about just massively PO’d?”

“I wonder what this guy did about the stupid f*cking ribbon magnets?” 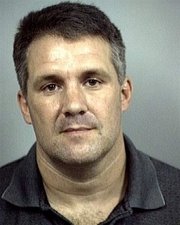 The discharged Lt. Colonel was given a two year deferred sentence for the 13 counts of reported vandalism:

An Air Force officer pleaded guilty Friday to defacing cars with bumper stickers supporting President Bush, and was given a two-year deferred sentence.

Mulligan said he will work with other lawyers to determine how much must be paid in restitution.

Mulligan said the plea agreement “affords Lt. Col. Fecteau the opportunity to get back on track,” noting his record will be cleared in two years if he stays out of trouble.

Fecteau originally faced 13 charges for defacing vehicles at the Denver airport from January to July 2005. Fecteau admitted to investigators he had vandalized cars starting around the time of the November 2004 election, but pleaded guilty to a single charge of criminal mischief that named all 13 victims.

Fecteau blacked out pro-Bush bumper stickers and then spray-painted an expletive over them.

Alexis is certainly not the first unhinged leftist to be arrested and convicted of violence against conservatives, by a long shot!