Despite the fact the Representative John Murtha continues to repeat his calls for a cut and run to Okinawa because the Iraqis want the US out of country, the Iraqi Sunnis are now begging the US to stay. 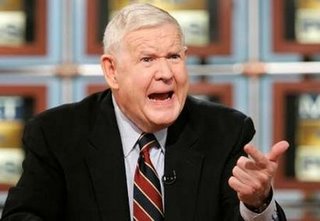 U.S. Rep. John Murtha (D-PA) speaks during a taping of ‘Meet the Press’ at the NBC studios June 18, 2006 in Washington. Murtha spoke about the war in Iraq and his call for the withdrawal of U.S. troops. (Reuters)

Reading between the lines at the New York Times:

The Sunni leaders have dropped demands for a quick withdrawal of American troops. Many now ask for little more than a timetable. A few Sunni leaders even say they want more American soldiers on the ground to help contain the widening chaos.

The new stance is one of the most significant shifts in attitude since the war began. It could influence White House plans for a reduction of the 134,000 troops here and help the Americans expand dialogue with elements of the insurgency…

…a remarkable message rang out from the loudspeakers of the Abu Hanifa Mosque, where Saddam Hussein made his last public appearance before the fall of Baghdad in 2003.

“The American Army is coming with the Iraqi Army — do not shoot,” the voice said, echoing through streets still filled with supporters of Mr. Hussein. “They are here to help you.”