“I want to go and help the Iraqi people. I want to let them know we’re not all ignorant fools.”

The victim’s girlfriend said of the former human shield attacker, “He had been laughing as he left the scene and may have bragged to his friends afterwards.”

Are We Lumberjacks? reported earlier on this violent peace activist and former Saddam human shield who put a rising rock star in a coma after hitting on his girlfriend. 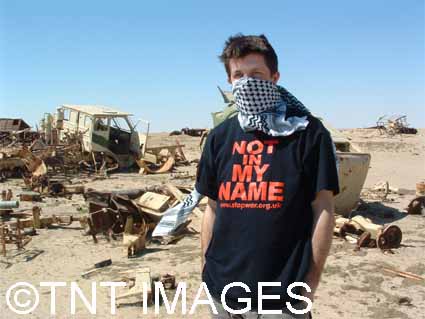 The violent attack on the London rock star happened on June 22, 2006 in London. The peace activist, Christiaan Briggs, did not turn himself in until July 2, 2006:

Police say the incident occurred on June 22 when Briggs allegedly punched 19-year-old Billy Leeson, causing the rising rock star to hit his head on the ground.

His condition was described as “critical but stable”.

Mr Nadin said an argument broke out between the pair after Briggs allegedly “made advances” towards Leeson’s girlfriend.

Police allege Briggs hit Leeson after getting off a bus at Camden Rd in Islington and left the scene.

Briggs handed himself in to police on Sunday and was arrested.

Sir Humphrey’s reports that the rocker Leeson is not doing well and his condition has declined since in the last week:

Inflammation spread through his body after a five-hour operation in which surgeons removed a piece of his skull to lessen pressure on the brain.

He remains unconscious, in a critical but stable condition.

Tim Blair reports on Briggs dislike of the pigs.
Florida Cracker notes Briggs selfless reasons to go to Iraq.
Newsbusters wonders if this story would be getting more attention if Briggs served in Iraq rather than, protested against it.