The animal behind the Beslan School Massacre is dead!

A Chechen terror website is calling the explosion that killed this mass murderer of children an accident.

HERE is the disgraceful ABC Nightline interview with the terrorist Shamil Basayev that outraged the Kremlin.
This proves that thankfully our mainstream media does not discriminate between which terror groups it will support! 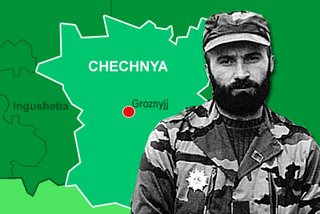 The Islamist Radical monster behind the Beslan School attacks and the Moscow Theater siege and the Most Wanted Chechen terrorist, Shamil Basayev, was killed in Ingushetia this morning:

President Vladimir Putin said Basayev’s killing was “deserved retribution” for terror attacks, including the 2004 mass hostage-taking at a school in Beslan.

The September 2004 attack on a school in Beslan, in the North Caucasus, led to at least 331 deaths. It triggered outrage in Russia and other countries, as many women and children were among the victims.

The reported death of Basayev has not yet been confirmed by Chechen rebel sources.

** Here is a chilling video clip (BBC) of Basayev taken when his terror group captured a Russian police station and confiscated its weapons- from an empty jail cell at the police station.

A prominent Chechen terror site has the latest posting by Basayev thanking Iraqis for the slaughter of the Russian diplomats. 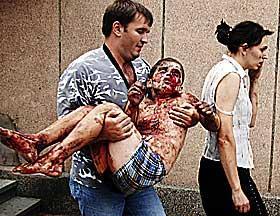 Shamil Basayev planned the terror attack on the school in Beslan. 375 people – 176 of them children – were killed in the attack at the Beslan school in September 2004.

In July of 2005, ABC News infuriated Russia when it held an interview with the terror leader and killer of children. 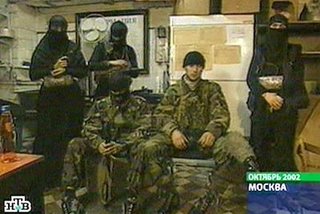 This picture is from videotape recordings of terrorist “rehearsals” for the Moscow (Nord-Ost) Theatre seizure in 2002. The building of the Dubrovka theater center in Moscow was seized by terrorists in the middle of a performance on Oct. 23, 2002. About a thousand people were taken hostage by the armed Islamist gang who demanded that Russian troops withdraw from Chechnya. On Oct. 26 Russian troops launched an assault on the theatre. 130 hostages were killed during the rescue.

Another, high profile Chechen terror leader, the so-called president of the Chechen republic of Ichkeria, Abdul-Khalim Saidulayev, was killed two weeks ago.

Counterterroism Blog explains the links between the Chechen and Al Qaeda terror groups.
HotAir has a big roundup.
Murdoc Online has the traumatic story of the surviving children from Beslan.