Bombs removed the dead terrorist Che Guevara… well, half of his face anyway… from the labor ministry building Friday. 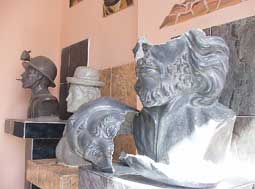 Here is that busted bust of Che Guevara in Oruno. (La Patria)

Stefania reports… A bomb blew away half of Che Guevara’s face on a statue in a labor ministry building in Oruro, Bolivia:

A small bomb partially destroyed a bronze bust of iconic guerrilla Ernesto “Che” Guevara on the ground floor of a labor federation in the west-central Bolivian city of Oruro.

Thursday afternoon’s blast came three days before elections for a Constituent Assembly the new Socialist government hopes will write a leftist charter for the Andean nation, and two weeks after President Evo Morales joined with the late rebel’s son to commemorate his birthday in the village where he was summarily executed by Bolivian forces in 1967.

Unionists in Oruro blamed the attack on unidentified “rightist terrorists” they claimed were seeking to disrupt Sunday’s elections.

The blast took place as union officials were meeting on an upper floor of the headquarters of Oruro’s Provincial Labor Federation.

Union leader Remigio Lopez said the explosive device blasted away the upper right-side portion of the sculpture of Guevara’s head.

The new Leftist leader of Bolivia and former coca farmer, Evo Morales, has long been a huge fan of Che’s. 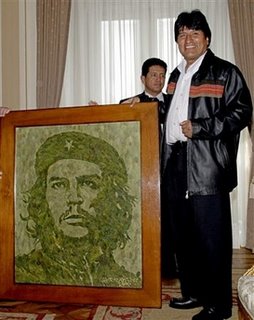 Bolivian President Evo Morales holds a portrait made with coca leaves of Ernesto ‘Che’ Guevara, the Argentine-born Cuban revolutionary who died in his unsuccessful attempt to bring communism to Bolivia, in La Paz, March 13, 2006. (Reuters) 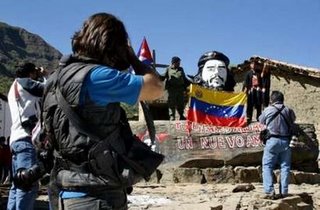 Photographers take pictures as two men posing with a Venezuelan flag next to a statue of Argentine revolutionary hero Ernesto ‘Che’ Guevara prior to a ceremony to celebrate his birth in the Southeastern Bolivian town of La Higuera, June 14, 2006, where Guevara was captured and killed in 1967. (REUTERS/Carlos Hugo Vaca)

Let’s hope the Bolivian democracy babes have not resorted to violence.

Bolivia voters today will choose 255 delegates to the assembly, which will begin work on retooling the Constitution Aug. 6.