The bombs went off during rush hour in India’s financial center,
BBC Video of the destruction HERE.

(More updates on the arrested terrorist posted below)

At least 7 bombs went off during rush hour in Mumbai. 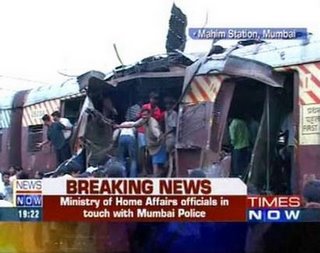 Bloomberg… The blasts have taken place in Khar, Mahim, Mira Road, Jogeshwari, Borivali, Matunga and Bandra, Roy said. No one has so far claimed responsibility for the blasts.
Independent Conservative is following the story from Mumbai. 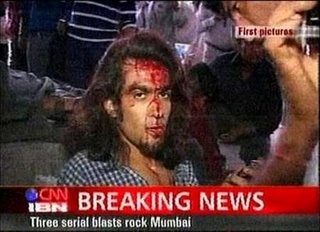 A man is injured after blasts in Mumbai, formerly known as Bombay, in this video grab July 11, 2006. (Reuters)

The newswires are now suspecting Islamic extremists being behind the blasts. 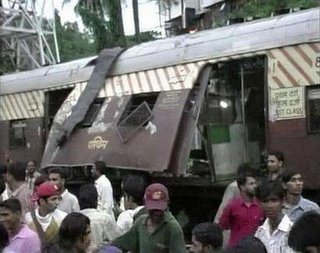 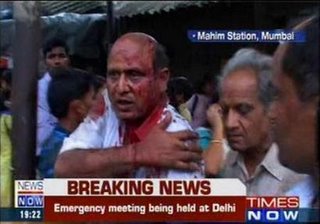 At least 40 people died in blasts on the rail network in the Indian city of Mumbai on Tuesday. (Reuters) 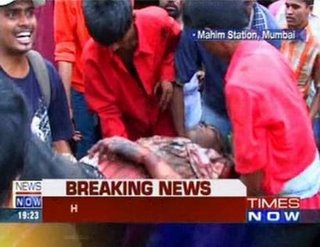 A man is injured after blasts in Mumbai, formerly known as Bombay. (Reuters) 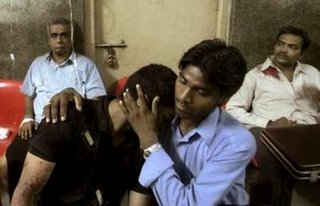 Victims of a train blast console each other at a hospital in Mumbai. (Reuters)

Update2 13:00 PM CST: A militant was arrested in Delhi with 2.5 kg RDX explosive on his possession:

Police was interrogating him to find out if he has any links with the serial blasts in Srinagar and Mumbai and to find which terrorist outfit he belonged to, he said.

An amount of Rs 49 lakh was also seized from his possession, police said, adding according to their information Hussain was working for one Pakistan-based militant Mukhtar Ahmed.

Hussian, who has been living in Jangpura locality of south Delhi, was arrested when he reached the Lodhi Road area in a car to apparently hand over the cash and explosives to someone.

Their is more on the arrest of Ajaz Hussain Khwaja at Sify News. He used to finance separatists in Jammu and Kashmir.

A British terror expert says the bombings may be the work of Al Qaeda:

A leading terror expert said that chilling similarities between Madrid, 7/7 and today’s blasts in Mumbai meant it was almost certain Islamic extremists were behind the latest outrage.

Security consultant Will Geddes said that all three attacks were targeted to “paralyse” key communication networks, and singled out two extreme Muslim groups based in Kashmir as likely culprits.

Mr Geddes said: “I think there is the highest likelihood it is the terrorist cell Lashkar-e-Toiba, who appear to be the strongest, most active terrorist group acting in Kashmir and are believed to be responsible for the attacks on Mumbai in 2003.