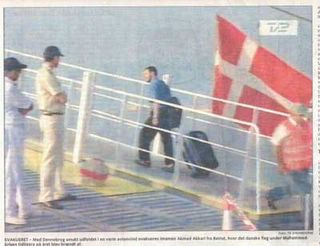 Neander News has more on the Radical Imam’s flight from Beirut.

** And, Bibelon has more on Akkari hiding behind the Danish flag!

Akkari who threatened to blow up a moderate Islamic politician this past year seemed grateful for the lift out of harms way:

One of the Danish Muslims who spearheaded the rallies against the prophet drawings, Lebanese-born Ahmad Akkari, was among those evacuated from Beirut on Thursday.

“My impression is that the transportation has been safe and that no one has been suffering,” Akkari told Denmark’s TV2 channel as he boarded a Greek ferry chartered by Denmark.

The Danish Imam Akkari was arrested earlier in his career for child abuse as reported at Freedom for Egyptians earlier this year:

According to the famous Danish newspaper JyllandsPosten, the spokesman of the extremist Imams in Denmark, Mr. Ahmed Akkari, violently attacked a 10 to 11 years old pupil while training to become a teacher at Lykkeskolen in Århus. The episode, that took place some years ago, was reported to the police by the school, and Mr. Akkari sacked immediately and forbidden future access to the premises of the school.

Mr. Akkari attacked the boy, during a run and catch game, when the boy touched the headscarf of a girl so that her hair got exposed. Mr. Akkari knocked the boy to the ground and several times hit him in the chest with his fists, completely loosing his self control.

Bibelon has much more on the life of Imam Akkari, the lying Danish Imam.