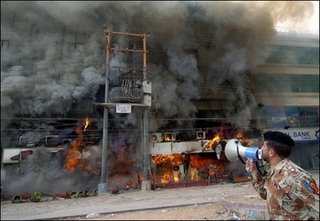 A Pakistani soldier shouts instructions to people trapped inside the burning Pizza Hut restaurant in Karachi. Fresh violence has flared in this southern Pakistani city as angry mobs went on the rampage during the funeral of a senior Shiite leader killed in a suicide blast a day earlier.(AFP/Asif Hassan)

The suicide bombing death of the Shiite and MMA leader Allama Hassan Turabi sparked riots after his burial on Saturday:

Muttahida Majlis-e-Amal leader Allama Hassan Turabi was laid to rest here in the premises of Mustafa Mosque at Abbas Town yesterday as violence flared in this southern Pakistani city as angry mobs went on a rampage after the funeral.

Gangs attacked and torched the Gulshan-e-Iqbal outlet of Pizza Hut and two petrol stations in protest at the death of Hassan Turabi. Protesters also attacked car showrooms and smashed up dozens of cars outside. Fires could be seen all around and the air was filled with thick, black smoke.

Police fired tear-gas to break up the crowds but there were no immediate reports of injuries.

Thousands of people had earlier attended funeral prayers for Turabi and his nephew Ali, aged about 10, whose killing also sparked rioting late on Friday.

Leaving their lunch behind them… 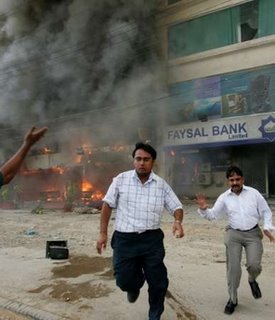 Residents run after some shops were set on fire by protesters during a demonstration in Karachi, July 15, 2006. (Reuters)

Police are trying to identify the bomber, suspected of being from an Islamist group linked to Al-Qaeda, by his head:

Police have released a picture of the bomber, whose head was blown off in the attack, and were trying to identify him.

The motive for the attack is still unknown and no group has claimed responsibility for the killing, though police said it bore the hallmarks of Sunni Muslim militants.

“We have not come to any conclusion yet but one key focus of the investigation is LJ,” said senior police investigator Niaz Ahmad Khosso, referring to Lashkar-e-Jhangvi, an anti-Shi’ite group whose members have ties with Osama bin Laden’s al Qaeda.

“This is because the explosives used are similar to those used in at least three previous LJ attacks,” he said

Everyone has their own way of mouring… 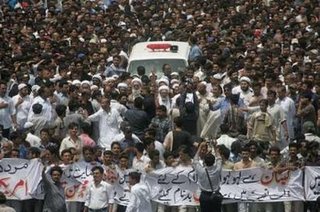