You have got to be kidding!

In a poll released last week, 94% of Iraqi’s supported a unity government.

But, this didn’t stop a western reporter from publishing today that the sectarian break-up of Iraq is now inevitable.

No wonder people are confused about Iraq!

When historians look back, the bombing of Shia Golden Dome Mosque may be the turning point in the formation of the democratic Iraq.

Since that horrible terrorist blast back on February 22, 2006…
The country has come around to support a unity government, much to the chagrin of the terrorist killers.

Ninety-four percent of Iraqis support a “unity” government, representing all religious and ethnic communities, as opposed to 2 percent who do not support it.

Asked to judge whether Iraqis should be segregated by religion, or by ethnicity, 78 percent of Iraqis oppose those prospects; only 13 percent support them. In multi-ethnic Baghdad, where most of the sectarian revenge killings occur, 76 percent of the public opposed ethnic separation; 10 percent supported it. 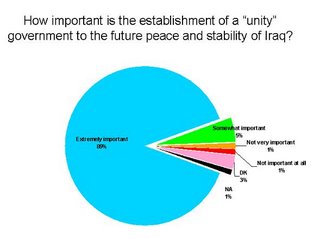 Even in the Sunni provinces, the new Iraqi government musters 23 percent support. And overall, Prime Minister Nouri al-Maliki commands approval numbers that any Western head of state would envy. Nationwide confidence in the al-Maliki government stands at 58 percent “approve” to 20 percent “disapprove.”

Kurds—roughly 20 percent of the population—support the new government 60 percent to 11 percent. Residents of the southern provinces—largely Shiite—approve 83 percent to 3 percent.

Al-Maliki himself commands a 55 percent approval rating, compared to 20 percent who disapprove.

The IRI asked respondents to list their three “highest priorities” for al-Maliki’s government.

** To the shock of American democrats and Okinawa John Murtha– “Withdrawal of coalition forces” failed to make the list.

Eighty-four percent of Iraqis list “security” as either their top, second, or third concern; 71 percent list “infrastructure”; and 54 percent list economic development/job creation. “Withdrawal of the coalition” was the top priority of only 13 percent of Iraqis, and among the top three of 33 percent.

More general measures confirm acceptance of the post-Saddam regime. A plurality of Iraqis now believe that Iraq is headed in the right direction, and that things will improve over the next 6 months, and in the next year. A strong majority (60 percent to 15 percent) expect things to improve over the next 5 years.

A Tunisian Muslim terrorist in Iraq, Abu Qudama al-Tunisi, was arrested in a raid in the suburb of al-Dhuloiya north of Baghdadwas in late June. He confessed that he was responsible for the attack that destroyed the Askari Shrine in Samarra back in February.

Iraqis are also showing that they are willing to sacrifice dearly for their new democracy. 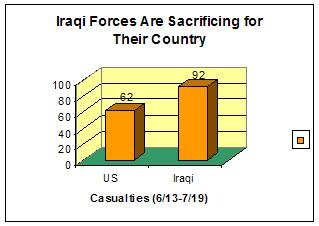 Heroic Iraqis killed in action in the fight for Baghdad in the last five weeks– 31 national police, 24 local police and 27 Iraqi soldiers.

Iraqis, along with Americans and Allied forces, are making great sacrifices for the future of a democratic Iraq.

And, much to the disappointment of democrats and their American media, Al Maliki today promised that his country would not slide into Civil War.