A lovely wedding, but no cake. 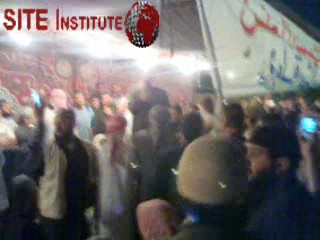 Sugiero sends this report on Jordanians celebrating Zarqawi’s wedding/martyrdom from The Search for International Terrorist Entities:

On the occasion of the death of Abu Musab al-Zarqawi, the Emir of al-Qaeda in Iraq, a “wedding” for his martyrdom was held in his native town of Zarqa’a in Jordan – a celebration which was captured by what seems to be a video recorder from a cellular phone, and subsequently distributed to password-protected jihadist forums. The footage, running roughly eight and half minutes, features a throng of people, some holding up their camera phones and others carrying a banner that reads: “The Martyred Hero, Abu Musab al-Zarqawi,” and two speakers giving a eulogy oration and encouraging the observers to follow Zarqawi.

The speakers put forth speeches that both heap adulation on Zarqawi and motivate the people to jihad, emphasizing the position that martyrs receive in Paradise. Their prayers to Allah to accept Zarqawi and present the Muslim Nation with a leader who is better and may inflict greater pain upon the enemy are set against a backdrop of the people shouting “Allah is Great!”

Four Radical Islamist Jordanian Parliamentarians were arrested on the Monday following the celebrated death of Zarqawi.

One of the Parliamentarians, Abu Fares, went as far as to say, “I can’t describe them (the innocents that were killed in Zarqawi’s attacks including the Jordanian hotel blasts) as martyrs; these were mobs and ignorant [people].”

Hundreds of people took to the streets of Amman protesting these radical islamists who have repeatedly called for the destruction of the Kingdom of Jordan.

Sugiero has more from the “wedding.”