Besides the biased mainstream media, doubting democrats and the propped up antiwar activists, the War in Iraq is a far cry from Vietnam. 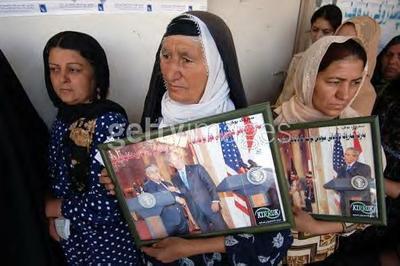 Iraq today in only three years, has a democratic parliament and cabinet, has held nationwide democratic elections, has a ruthless dictator in on trial for genocide, an evil terror leader in his grave, and a grateful population.

On Saturday, despite the overwhelming vote in the Senate just days earlier to stay the course in Iraq (86-13), Democratic Leader Howard Dean compared the struggles in Iraq with that of Vietnam in the democrats weekly radio address:

The parallels between the mistakes being made today in Iraq and the behavior of our government a generation ago are striking. Troops are sent to fight by an administration that refuses to listen to the advice of military leaders. (Not true) The Administration decides it’s ok to conceal information from the Congress and the American people. Promises like “stay the course” “Peace is at Hand” or “the insurgency is in its last throes” are made by an increasingly desperate Administration.

A majority of the American people don’t believe the President is telling the truth, while the Administration and its supporters question the patriotism of veterans who disagree with them, accusing them of “cut and run”.

And among the victims are brave American soldiers who are the targets of an insurgency because of failed political leadership and a lack of foresight and planning. We don’t want another wall with 55,000 names of courageous Americans who were let down by their Government.

Yechh! That is just toxic!

** Not to mention that it would take nearly 75 years for the War in Iraq see 58,219 US military fatalities like we saw in Vietnam going with current trends! **

John Kerry was not any better but at least he was honest with himself this time. In December 2003, John Kerry said”:

“I fear that in the run-up to the 2004 election the administration is considering what is tantamount to a cut-and-run strategy.”

But, this week (June 2006) he shamelessly called for a Senate vote to exit Iraq.

But, as National Review Online reported today, Iraq is a far cry from Vietnam. (via Free Republic) Here are clips from that article, the charts were added:

Iraq Is Not Another Vietnam:

Most of the grunts in Vietnam were draftees; in Iraq, they all volunteered. 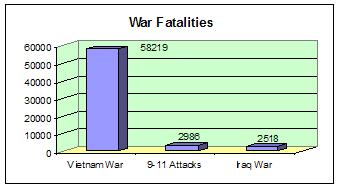 On the Vietnam Memorial in Washington are about 58,000 names; in Iraq, the total number of KIAs is lower than the number of Americans killed on 9/11. 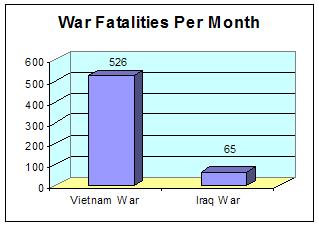 In both wars, much of the media coverage was crazed. My Lai involved a few hundred people, Abu Ghraib fewer than that. But these events dominated news coverage, which tended to ignore the larger meaning of what was going on. 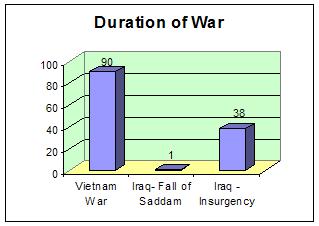 …We ended up as the exceptional nation, Number One, more influential than any nation in history, the City on a Hill, hearing anti-American language which boiled down to “Yankee go home and take me with you.”

The basic truth about our mission in Iraq is the same as that about Vietnam: We’re doing something important and positive in the world.