Besides Saturdays arrests in Canada there were at least 18 other worldwide arrests of terror suspects in Canada, the United States, Britain, Bosnia, Denmark, Sweden, and Bangladesh linked to these Canadian terror suspects. Canadian officials admitted that internet monitoring was helpful in the investigation of the terrorist suspects. So, how will Saturday’s terror arrests afffect the various Canadian terror websites?

Here’s a look at one of the more popular Canadian jihadist websites on the internet, Jihad Unspun.

Remember all of those gruesome videos that were played on Jihad Unspun of American men and women getting blown up on the Iraqi battlefield? Well, unfortunately, JI now has a members only section to watch these brutal and mysterious videos- The JUS Club. 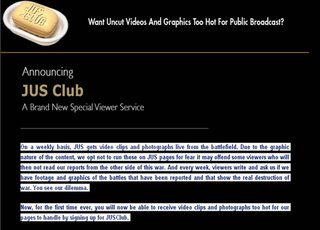 On a weekly basis, JUS gets video clips and photographs live from the battlefield. Due to the graphic nature of the content, we opt not to run these on JUS pages for fear it may offend some viewers who will then not read our reports from the other side of this war. And every week, viewers write and ask us if we have footage and graphics of the battles that have been reported and that show the real destruction of war. You see our dilemma.

Now, for the first time ever, you will now be able to receive video clips and photographs too hot for our pages to handle by signing up for JUSClub.

So, by becoming a member you get all of the gruesome video footage from the front and much more, but this is available to members only.

There are other ways to view information reported on the Jihad Unspun website.

This map was taken from an article written about the Muhammad cartoon controversy. 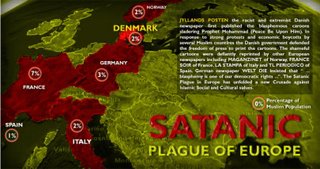 Here is what the Canadian website, Jihad Unspun, had to say about secular Europe and the Danish Muhammad controversy:

The perpetrators of these crimes (the Muhammad cartoonists) deserve execution similar to what Von Gogh met so that everyone comes to know the price of reviling Prophet Mohammad (Peace Be Upon Him). In the last century a similar incident took place in British India when a Hindu named Rajpal insulted Prophet Muhammad (Peace Be Upon Him) by printing derogatory cartoon of our Prophet. An ordinary faithful guardian of the honor came out and punished that devil with death. He was Ghazi Ilmuddin who was later arrested and charged by British authorities, he pleaded not guilty and gladly accepted the gallows to earn martyrdom. His holy grave lies in peace to this day in heart of Pakistan, Lahore. Taliban Mujahideen have promised reward of gold bar for anyone executing the evil cartoonist. Are we waiting for another Nur Ad Din Zangi or Ghazi Ilmuddin or has our faith become worthless? Only time will tell.

Do you suppose the cartoon Rajpal printed was as insulting as this one from Denmark?

I may be bit hard-headed but I still have a hard time being convinced that this “Muhammad with a donkey” cartoon is blasphemous, especially when Muhammad has been depicted in Western and Eastern artwork for centuries. 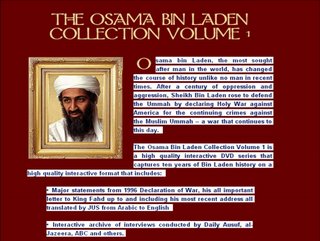 Here is the text for the Osama Bin Laden Collection, Volume 1, now available at Canadian website Jihad Unspun, notice when war was declared:

Osama bin Laden, the most sought after man in the world, has changed the course of history unlike no man in recent times. After a century of oppression and aggression, Sheikh Bin Laden rose to defend the Ummah by declaring Holy War against America for the continuing crimes against the Muslim Ummah – a war that continues to this day.

• Major statements from 1996 Declaration of War, his all important letter to King Fahd up to and including his most recent address all translated by JUS from Arabic to English

• Interactive archive of interviews conducted by Daily Ausuf, al-Jazeera, ABC and others…

Jihad Unspun has certainly come of age!
We’ll have to see how this news on Saturday will affect this jihadist website in the future.